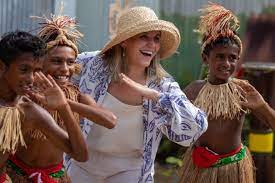 One of the world’s last untapped tourism destinations is now open to travellers big on curiosity and short on time thanks to the launch of a new tour that packs six iconic Torres Strait experiences into one big day out from Cairns.
A Strait Day, a new tour developed by two mates residing in the Torres Strait, allows visitors the rare opportunity to experience one of the few places in the world where ancient culture is still part of everyday life. Visitors can depart Cairns by plane in the morning and then seamlessly hop-scotch between Waibene (Thursday Island) and Ngurapai (Horn Island) some 800 km away to learn about culture, food, history, and tradition – all in one convenient package.
Until now most travellers to the Torres Strait have arrived by cruise ships, stayed in unbranded accommodation, or driven the long red track to the tip of Queensland to meet the ferry to Torres Strait.
Co-founder of Strait Experience and a proud Traditional Owner on Masig Island, Fraser Nai said the tour targets travellers short on time and big on curiosity making The Torres Strait “doable in a day”. It also provides a powerful platform to tell the story of Australia’s two Indigenous cultures to a new audience.
“Torres Strait, I would say, is like the last frontier. You’ve gone everywhere in Australia and seen it, but you haven’t seen Torres Strait,” said Mr Nai.
“It’s the only place in Australia where you will see both Indigenous Aboriginal Australians and Indigenous Torres Strait Islander Australians in their own country.
“Our culture is unique. We have our own customs, we have our own beliefs and it is something that we want to share with the world.”
The six attractions and experiences in the one-day package tour includes a scenic flight over the Torres Strait, a tour of Ngurapai (Horn Island) stopping at Horn Island Heritage Museum and looking at secret wartime infrastructure, a tour of Waibene (Thursday Island) with time to explore the Gab Titui Cultural Centre and Green Hill Fort, an Islander style banquet lunch, and a stirring song and dance performance by local youths. Throughout the day, local Islander guides share their own stories and coordinate ground and ferry transfers to optimise the time in region.
Mr Nai is passionate about platforming small Torres Strait Island businesses in order to empower the community, stimulate economic growth, and create career pathways. The tour showcases existing small tourism businesses – known for their excellence – and bundles them into a bigger tour.
“We are creating an economic pathway, creating purpose, creating stronger culture – those are the values that sit behind this product,” said Mr Nai who added that he wants more people to know about The Torres Strait.
“Come and have a look and you will find out about the Torres Strait story.”
A Strait Day will run on the first Saturday of every month with the next tour operating in July. The cost is $1399 per person.
The tour is the first of a handful of packages being developed by Strait Experience to showcase remote locations and cultures of Queensland. Also in the pipeline are Tip in a Day trip, a one-day tour from Cairns to Pajinka at Australia’s most northern point, a two-hour scenic tour over some of the 274 islands that make up the Torres Strait, and multi-night immersions to remote and isolated island communities.
For more information about the A Strait Day experience visit the Strait Experience website.

Six and more of the best on the Sunshine Coast for Easter!