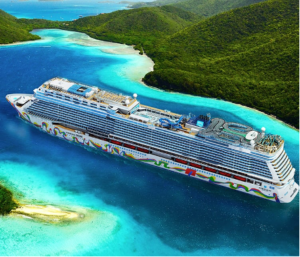 As part of its relaunch plan, NCL has announced what it describes as its highly anticipated return to Miami, which it also describes as the Cruise Capital of the World, with Norwegian Gem scheduled to cruise seven-day itineraries to the Caribbean beginning August 15, 2021, and a four-day voyage to the Bahamas in November.

NCL says it has also opened for sale additional itineraries to Bermuda starting September 26, 2021, from New York on Norwegian Breakaway; the Mexican Riviera on October 24, 2021, from Los Angeles aboard Norwegian Bliss; and the Caribbean on November 13, 2021, from Port Canaveral, Fla. on Norwegian Escape.

In addition, Norwegian Encore, the newest ship in the fleet, will make her debut on the West Coast, replacing the previously announced Norwegian Bliss in Seattle for the 2021 northern hemisphere summer cruise season, calling to the Alaska ports of Juneau, Skagway, Ketchikan, and Icy Strait Point, while also offering guests majestic views of Endicott Arm and Dawes Glacier or Glacier Bay.

Guests and travel partners with impacted reservations will be contacted directly.

All voyages in the U.S. are contingent on receiving authorization from the U.S. Centers for Disease Control and Prevention.

Harry Sommer, president, and chief executive officer of Norwegian Cruise Line said, “With these additional itineraries, we’re providing travelers with more opportunities to set sail from some of their favorite homeports and to some of their preferred destinations,” adding,  “We are very excited to sail in the U.S. again and to sail first with our latest beautiful ship Norwegian Encore. We’re able to reintroduce her to our guests and invite them to experience her world-class offerings, as she makes her debut in Seattle and Alaska.”

The Cruise Line’s Peace of Mind cancelation policy remains in effect for guests sailing on cruises with embarkation dates through October 31, 2021, with these guests having the flexibility to cancel their cruise 15 days prior to departure.  Those who take advantage of the Peace of Mind policy will receive a full refund in the form of a future cruise credit which may be applied to any sailing through December 31, 2022.

In addition, NCL recently extended its 60-day final payment requirement to all voyages with embarkations through December 31, 2021, instead of the standard 120 days, allowing for more flexible payment terms.

The companies say that its restart efforts continue in partnership with local governments and are guided by the robust protocols of the SailSAFE™ health and safety program, which at its cornerstone includes that all crew and guests must be fully vaccinated to embark for voyages through October 31, 2021 and that working with the leading experts of the SailSAFE Global Health and Wellness Council, the robust protocols will regularly be evaluated and modified as needed, making science-based decisions to protect guests, crew and the destinations it visits. As protocols evolve and additional information becomes available, updates will be published at www.ncl.com/sail-safe.

First Qantas A380 returns to Australia

Asiana Airlines to be acquired by Korean Air

US CDC launches efforts to vaccinate cruise ship crews, but will Australia