Has the travel industry really left the pandemic woes behind?LaoSafe Launches Destination VideoCruising returns to NZ watersTraversing Coastal India with Jhol in BangkokNew Deals From Your Travel ClubHertz Advances Electric Vehicle Adoption in Australia With PolestarThe Mountain Calls: Gentle Tourism in the AlpsGangtey Lodge Reopens with New Guest Experiences as Bhutan Welcomes Travelers Back in September 2022ETC partners with top New Zealand rail operatorTravelManagers Adds ‘TCF’ to Consumer Protection Promise
Join Places We Go and Chimu Adventures in the Arctic on Channel 10 this Saturday as they discover its history and how you can travel there. - Global Travel Media

Join Places We Go and Chimu Adventures in the Arctic on Channel 10 this Saturday as they discover its history and how you can travel there.

The Latin America and Polar Travel specialists, Chimu Adventures, are delighted to have hosted Places We Go aboard a Chimu Exclusive Cruise to film a two-part series about the Arctic. The first episode aired on Channel 10 on Saturday 7th September and the second episode will be shown on Saturday 14th September at 2.50pm.

While the first episode focused on the destination itself, including its wildlife, the second episode on Saturday 14th September will delve into the Arctic’s challenging history, including the explorers who tried to conquer it, the ship, expedition crew and the options for travelling to the Arctic sustainably.

The episodes, presented by Jennifer Adams, were filmed during Chimu’s charter voyage, ‘Arctic Unveiled.’ The crew departed on the 23rd June 2019 and sailed for eight days around the Spitsbergen archipelago. The series is an informative and exciting introduction to the region, highlighting the fragility of this area and the urgent need to preserve it. It is an ideal marketing tool for agents wishing to expand their Arctic knowledge and learn how clients can travel there in a sustainable way.

Chimu have created a dedicated landing page complete with Marketing Pack for agents to complement the series.

Starting its journey in the world’s northernmost city of Longyearbyen in Norway – a three-hour flight north of Oslo – Jennifer Adams, the Places We Go Crew and Chimu Co-founders Chad Carey and Greg Carter were among just 200 passengers to sail aboard small ship the Ocean Atlantic in search of rare Arctic wildlife such as polar bears, beluga whales and reindeer, and ethereal Arctic landscapes like icebergs, mountains and glaciers. 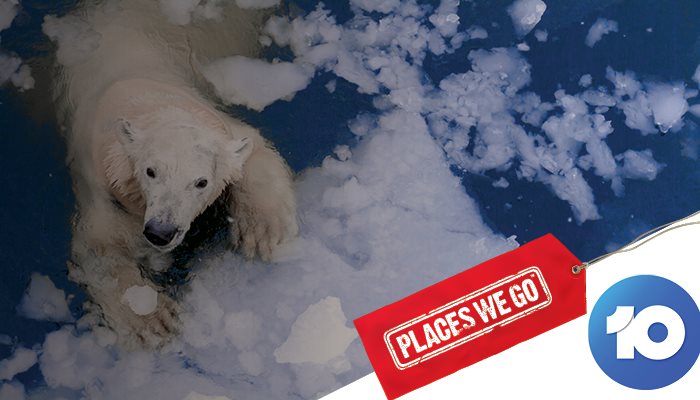 The series is an excellent visual representation of the region and an invaluable educational asset to travel industry professionals who are not familiar with the area, teaching them about this delicate landscape.

Chimu’s polar charter voyages are designed to educate passengers about the pristine nature of these destinations. They only ever take small ships of under 200 passengers to either the Arctic or Antarctic which minimises impact while maximising the experience for guests.

Chimu offer Australia’s largest selection of small polar vessels and most of their Destination Specialists have travelled to Antarctica and/or the Arctic. Chimu Co-founder, Chad Carey, who was aboard the ship with the Places We Go crew and his young family, elaborates: “Something we are most proud of at Chimu is taking on the polar regions in a ‘One Stop Shop’ perspective, the first company to do so in Australia and, to the best of my knowledge, globally. We offer clients almost the full suite of ships to the Arctic and Antarctica and pair that product range with expert advice to match them with the right ship. Travelling to the polar regions is a huge experience and we appreciate the importance of getting it right.”

The Arctic was the third destination that Places We Go have filmed with Chimu Adventures having travelled to Antarctica with them in 2013 and Chile in 2014. To coincide with this series going live, Chimu are offering 20% off select Arctic & Antarctic cruises for Places We Go customers, essential marketing tools for agents, and additional exclusive polar deals so be sure to watch the show to discover how to get these offers.

Beyond Travel team members gains Academy Diplomas from the US Consul

Discover the Scenic Difference at the Getaway Travel Showcase