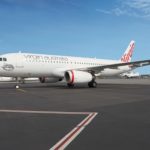 Virgin Australia is today celebrating the first of three new Gold Coast routes, kicking off with the inaugural Launceston – Gold Coast service which will touch down for the first time in the Sunshine State tonight.
Today’s inaugural service will be closely followed by the daily Cairns – Gold Coast year-round service which is launching on Thursday, followed by Hobart – Gold Coast which will commence on 13 December and will operate 4 times per week until 30 January 2022.
Virgin Australia Chief Strategy and Transformation Officer Alistair Hartley said the services will add over 19,000 seats each month to Virgin Australia’s domestic network, which has welcomed 15 additional routes since September.
“We see these new Gold Coast services as a vote of confidence in the Queensland tourism sector and the aviation industry as a whole,” Mr Hartley said.

“We’re proud to be supporting Queenslanders, the local economy, and also proud to see more of our crew returning to the skies.”

“The Palaszczuk Government understands the importance of aviation to the recovery of Queensland’s tourism industry,” Mr Hinchliffe said.

“That’s why we’re continuing to support Queensland airports to get flights back in the air to the State’s visitor destinations.

“Virgin Australia’s new services to the Gold Coast and Cairns are terrific news for tourism operators and local visitor economies.

“Whether you’re reuniting with family and friends over Christmas or looking forward to a holiday getaway, Virgin Australia’s commitment to new flights makes Queensland the place to be this summer.”

Queensland Airports Limited CEO Chris Mills said Virgin Australia had significantly expanded its presence on the Gold Coast and these services were part of an overall capacity increase – ready for the reopening of the Queensland border.

“It is particularly pleasing as we start to rebuild, that Virgin Australia is prioritising the Gold Coast as a key destination,” he said.

“It shows the strength of the region and reinforces our belief that people are keen to come back here as soon as the Queensland border reopens to NSW, Victoria and the ACT.

“It also highlights the growth of the Gold Coast itself and the increasing number of locals that are keen to book their next holiday.”

“Summer is an ideal time to visit the Gold Coast and experience our warm climate, theme parks and attractions, unrivalled dining scene, rainforest hinterland and stretch of pristine beaches,” she said.

“We are thrilled to have partnered with the Queensland Government, Gold Coast Airport, City of Gold Coast and Virgin Australia to connect more Australians, more easily, than ever before.”

What’s Qantas new policy to revive aviation all about?