The Head of Bight Visitors Centre is welcoming the whales and tourists back for a season it hopes will help in its mission to support First Nations communities on the Nullarbor.

Eugene Rondon and partner Jess Sheather manage the Head of Bight Visitors Centre and say visitors can see up to 100 Southern Right whales at the major calving spot on a good day.

“It’s a natural nursery to them, and has been for a very long time,” he said.

“Every year, pregnant whales come in and give birth to their calves just outside of the Bight area, and bring their calves into the Bight to raise for about a month.”

“Each season, approximately 60 calves are born at our Head of Bight location.”

The whale watching season usually attracts up to 300 visitors each day, but Rondon is hoping that this season will have an even greater impact upon tourism because Australians won’t be travelling overseas during the winter months.

“We hope that because people cannot go elsewhere due to restrictions, we will have an even bigger season this year,” he says.

“It makes sense that that is what will happen, as long as the borders to Western Australia remain open because that has had a big impact too.”

Unlike many tourist destinations, where money is injected back into a region or town, the Head of Bight is in the middle of nowhere, with the closest township more than 300km away. 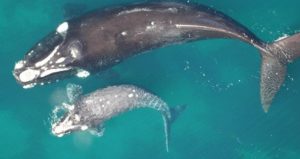 Ronson says this means the financial side of tourism is run quite differently at the Head of Bight Visitors Centre.

“My partner and I are actually contracted to the Aboriginal Lands Trust to look after the property and the business,” he says.

“The money generated from tourists who come past gets injected back into the Aboriginal Lands Trust, which goes out to support projects within various communities.

“A whole township isn’t lifted like it would be at other tourist destinations, the money goes into Aboriginal Land Trust programs instead. 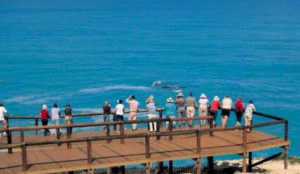 The Trust holds, manages and administers South Australian land, including that on which the Head of Bight Visitors Centre is run.

While this is the arrangement for the clifftop Visitors Centre, other tourism providers also benefit from the whale watching season.

Local companies offer scenic flights, boat charters and bus tours, as well as accommodation, in towns on the Eyre Peninsula.

Tourists can visit the Head of Bight seven days a week for the entirety of the whale watching season, which extends from now until the end of October.

For more information, head to www.headofbight.com.au.

JOHN ROZENTALS enjoys a glass or three of the very best bubbles in the best address in New Zealand’s Queenstown.

JOHN ROZENTALS has a couple of spiritual moments in the Flinders Ranges, a special corner of Australia.

Palm Springs with a Splash of Miami Nice