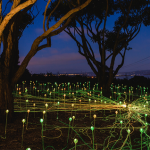 Art installation Field of Light: Avenue of Honour created by Bruce Munro for FORM and the City of Albany, has injected $17.18 million dollars into regional Western Australia, according to independent research.Figures released this month by Metrix Consulting for Tourism Western Australia revealed the immersive installation, a field of 16,000 glowing glass spheres on slender stems, attracted a total of 29,453 intrastate, interstate and international visitors who travelled to Albany with the sole intention to view the artwork.

The event exceeded all attendance expectations, with more than 186,000 attendees during its seven months showing.

The Metrix research also showed the installation was a boon for accommodation providers in the region, resulting in 82,238 nights spent in the South West short stay venues.

“Beyond the economic benefit of the artwork, the installation was a catalyst in many ways. It was a brilliant showcase of the Albany community through the involvement of its volunteers and a demonstration of the power art has to influence visitation. We hope it also showcased Albany nationally as a world-class tourism destination,” FORM Executive Director, Lynda Dorrington said.

“Visitors to the installation, who walked its gently glowing path of light, have described it as ‘healing, exhilarating, emotional and humbling.”

“The emotional pull of this amazing artwork has had a ripple effect that’s benefited not only Albany but the entire South West region” Tourism Minister Paul Papalia said.

“It was a stunning attraction in its own right and also complemented Albany’s world-class National Anzac Centre, giving visitors a unique and deeply-moving historical experience. 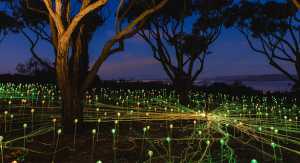 Field of Light: Avenue of Honour was exhibited at Albany’s Avenue of Honour on Mount Clarence between October 2018 and April 2019 to commemorate the 100th anniversary of the end of the First World War and honour the Anzac legend.

Field of Light: Avenue of Honour was commissioned by cultural organisation FORM with the City of Albany and made possible by funding from the Australian Government through the Building Better Regions Fund and the State Government through Tourism Western Australia, Lotterywest with the support from Christine and Kerry Stokes AC.

What’s on in Lake Mac? The top events to catch in Lake Macquarie this spring