Grab a Top Spot to View the Best of Vivid Sydney

If you thought exploring Vivid Sydney’s three-kilometre Light Walk on foot was the only way to be amazed by the creativity and innovation of this year’s installations, think again. There are an array of ways to explore the largest festival of light, music and ideas in the Southern Hemisphere and still ensure you capture the most social-worthy snaps along the way. 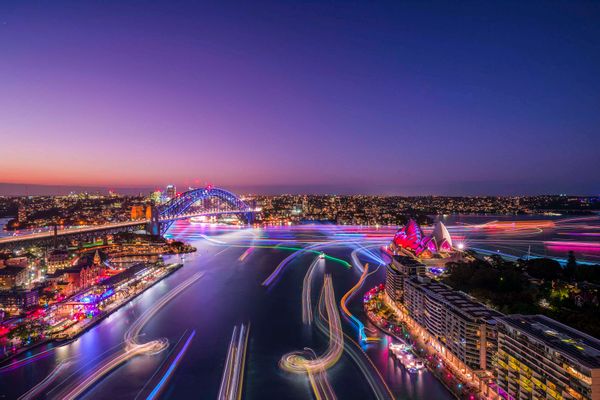 “For 23 days, Vivid Sydney transforms the city of Sydney into a mesmerising kaleidoscope of colour with awe-inspiring light sculptures and large-scale projections. It really is a world-class event that has to be seen in person,” Destination NSW CEO and Executive Producer – Vivid Sydney, Sandra Chipchase said.

“This year, there are more ways to experience the festival than ever before, whether it’s from the water of our stunning harbour, high above the city or even whirling around on a theme park ride,” Ms Chipchase added.

Make the most of the restaurants with harbour views and you’ll be treated to a double whammy. O Bar & Dining is a revolving restaurant that boasts 360 degree views from 47 stories up. Order two Vivid-inspired ‘Glow’ cocktails and receive a complimentary share plate as you watch the light show. Blu Bar on 36 at Shangri-La Sydney has views of the entire harbour, including the Sydney Harbour Bridge and the Sydney Opera House as does Club InterContinental, the rooftop bar and Executive Club Lounge at the Intercontinental Sydney, available to guests.

The Samsung Electric Playground offers some of the best vantage points to take in Vivid Sydney’s magic. Capture the perfect memory from several specially curated spots that give you an alternate view of spectacular Circular Quay, whether from the top of the 6.5-metre Infinity Slide or in the serenity of the Samsung Sky Walk. When it comes to taking the ultimate Vivid Sydney photo, the Samsung Electric Playground has over 20 Galaxy S10 handsets set-up throughout the experience, pre-curated by experts to capture the most epic Vivid Sydney memories – even in super-low light conditions.

Room with a view

If you haven’t been to Taronga Zoo Sydney recently, you may not realise that they have some of the best harbour views in town. The safari-style overnight tents, part of the Roar and Snore program, allows guests to experience these views combined with an unforgettable overnight animal encounter. Want to keep the outdoor vibe, but with a little less safari? Opt for the Igloos on the Pier at Pier One Sydney Harbour. You can hire the see-through igloos for a few hours and have it catered, or stay the night where you are literally sleeping under the stars. It gives a whole new meaning to a dreamy night’s sleep.

Be part of the experience

The BridgeClimb Sydney offers an amazing experience at any time of year, but doing it during Vivid Sydney adds another dimension altogether. Not only do you have uninterrupted views of the Sydney Opera House, you can look down and see the light installations play out before you. You actually become part of it, how cool is that?

Float amongst it all

Being on the harbour while everything around you is lit up like a magical fairy wonderland is a special experience. And it’s not always an expensive one either. Catch a Sydney Ferry or go for one of the special Vivid Sydney cruise packages such as a two hour cruise that goes past Fort Denison and includes an Aboriginal cultural performance for $35 or a 90 minute Catamaran Cruise for just $49. If you want to splurge, you might like the six course degustation dinner cruise with matched bin and vintage Penfolds wines for $270.

The Sydney residents that get to enjoy the best views of Vivid Sydney are the seagulls. But you can beat them at their own game by getting a Sydney HeliTours tour of the harbour. For 25 minutes you will get to soar high above Vivid Sydney, capturing social-worthy shots that will be hard for anyone else to match. Or if you’d prefer to be up high but stationary, the observation deck at Sydney Tower Eye is the next best thing.

Head out a little further

Visitors flock to the CBD to take in Vivid Sydney, but you can get just as much out of it if you travel to Chatswood. There’s a Light Bazaar, a Cascading Harp, a six-metre tall sculpture of the world and projections that create an interactive show between shadow and light. This insider knowledge allows you to enjoy the experience at your own pace – check it out before everyone gets in on the secret.

The ride of your life

Everyone loves a thrill ride and Luna Park comes into its own during Vivid Sydney with a number of different light installations. The Amusement Park has a brand new family ride, Volaré. The largest waveswinger in Australia, Volaré is a flying chairs inspired ride lit up with thousands of LED lights to complement the festival. Experience the magic of flight and then take your festival experience to new heights once you climb on board the Park’s Ferris Wheel for a different perspective of this Vivid Sydney precinct.

American Express Card Members can enjoy exclusive access to the American Express Lounge located at the Cruise Bar Rooftop on Level 3 of the Overseas Passenger Terminal. With spectacular, uninterrupted views of Circular Quay and the Sydney Opera House, it is the perfect way to start or end the night, or have a break between seeing the lights of Vivid Sydney. Non Card Members are welcome after 8pm, but must register at amex.com.au/registerlounge