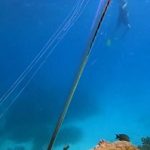 Wavelength Reef Cruises Master Reef Guide Tahn Miller knew he had come across something extraordinary when he saw a glistening silver ‘sword-like’ fish dancing through the shallows of Opal Reef on the Great Barrier Reef earlier this month. The individual was a juvenile oarfish (Regalecus russellii) and Mr Miller’s video footage is the first recorded encounter of this species on the Great Barrier Reef and the eastern seaboard of Australia.

Mr Miller and his colleague, Marine Biologist Jorja Gilmore, spotted the 35 to 40 centimetre long, skinny fish with a shimmering mirror-like outer skin while leading a group of snorkellers on a Wavelength Reef Cruises Outer Great Barrier Reef tour. The unique physical characteristics of the species made them realise they had found something very special.

“At first I couldn’t quite place what species of fish it was, but then I saw the shiny mercury-coloured body, two predominant eyes and the ultra-fine dorsal fin running head to tail, undulating like mini waves propelling through the water. I knew we had come across something rarely seen on the Great Barrier Reef,” said Mr Miller.

“Luckily, I had my camera and started to film straight away.

“At that moment I felt like the ocean had delivered a secret treasure to us. It was truly a once-in-a-lifetime encounter.”

Mr Miller said it was an exciting moment, not just for the Wavelength Reef Cruises crew, but also for the guests snorkelling the Reef that day.

“The sighting definitely enriched our guests’ snorkelling experience – not only the initial encounter below the surface but also the identification process that unfolded throughout the day,” Mr Miller said.

“The oarfish wasn’t in any of the Reef guidebooks onboard, so we tapped into the Master Reef Guide network and experts from the Great Barrier Reef Marine Park Authority to help identify the species.”

Oarfish are believed to be the world’s longest bony fish and can grow to an incredible eight metres in length.

“This little oarfish was about 35 to 40 centimetres long or about one to two metres including the fins, which is what led us to conclude it was a juvenile,” Mr Miller said.

“It had a mirror finish, like perfectly polished silver, and was as straight as an arrow, almost having the initial appearance of a newly forged sword.”

Since the sighting, Mr Miller has investigated other recorded encounters with a juvenile oarfish in the wild, including reaching out to deep-sea experts such as Dr Tyson R Roberts, the world’s leading oarfish expert, for many years a Research Associate of the Smithsonian Tropical Research Institute in Panama.

Dr Roberts confirmed that the individual filmed by Mr Miller was the species Regalecus russelli, which features a single dorsal fin crest with five to six extremely elongated rays.

“This is the first record of this species on the Great Barrier Reef and on the eastern seaboard of Australia,” said Dr Roberts.

“There have been other oarfish recorded in southeastern Australia, but they are the Regalecus glesne species, which lives in cold water and has two dorsal fin crests above the head, differing from the individual spotted at Opal Reef.

“The only other Australian record of Regalecus russelli was at Port Hedland in Western Australia.”

Anyone who comes across what they believe could be an oarfish on the Great Barrier Reef is encouraged to log the sighting with the Eye on the Reef App.

Mr Miller said while an encounter with an oarfish on the Great Barrier Reef is highly unusual, with over 1,600 species of fish found on the Reef, visitors can experience a diverse selection of exceptional marine life and underwater structures.

“The Reef has an amazing power to connect human beings with nature. When you see it firsthand it entices you in, you fall in love with this environment and are inspired to protect it,” Mr Miller said.

“Put simply, visiting the Great Barrier Reef is a must!”

Opal Reef is located on the Outer Great Barrier Reef between Port Douglas and Cape Tribulation in Queensland. Wavelength Reef Cruises was the first tour operator to visit this Reef in 1986. It has been offering world-class snorkel experiences at this site ever since.