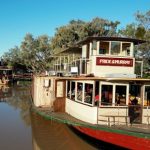 Longreach is maybe 600km from the Pacific Ocean, but it is now one of Australia’s largest cruising hubs. Nearly 28,000 travellers are expected to cruise the Thomson River this season thanks to the arrival of the 100-year-old paddlewheeler, Pride of the Murray.

Grazier, outback ambassador and co-founder of Outback Pioneers, Richard Kinnon recently made headlines moving the 100-tonne, 25-metre and 100-year-old pride of the Murray1750 km from Echuca to Longreach. Its addition to Outback Pioneers fleet means the tour operators will welcome aboard the equivalent of 14 PO cruise ships full of passengers this year alone.

If you’d said to me a year ago that dusty, old Longreach would become a cruising hub in Australia, I would have laughed, but after all the coverage and people seeing her on the way up from Echuca we’ve been overwhelmed with bookings, Mr Kinnon said. It feels as though everyone who saw her on the road wants to come up to see how she looks back in the water after some restoration work. The response has been record-breaking.

We’ve taken bookings this week for two years out The Pride of the Murray Lido deck might not have a spa-like those big ships, but she makes up for that in stories and history. Imagine if these decks could talk From the deck, you look across Australia’s striking outback and most magic rivers.

With every Starlights Cruise Experience, the cruise we throw in a memorable sunset, a million stars, Australian wildlife, bush poetry, the swaying Coolabah trees, a stockman’s dinner and loads of laughs. To get the Pride of the Murray ready for its first cruise tomorrow afternoon has been a mega marine effort with nearly 30 boat specialists in Longreach working on the vessel. The team painstakingly re-corked and tarred the entire giant hull by hand using a 2000-year-old boat technique still used today.

The Pride of the Murray now looks as good as the day she was first launched, Mr Kinnon said. She has undergone full safety checks the paint has been touched up and she had a clean and polish throughout. The team has worked from dawn to dusk and in ten days it ensured the Pride of the Murray was ship-shape to welcome her first passengers aboard tomorrow. Longreach Mayor, Tony Rayner said the Pride of the Murraysjourney to the region had ignited everyone’s interest with many wanting to hop on board.

I think the whole town has bought a ticket to welcome the Pride of the Murray, he said. I have to admit, when Richard first floated his dream of bringing it Longreach, I thought he was mad. To do what Richard has done has been colossal. He certainly proves the Longreach pioneering spirit is alive and well. To give some perspective Richard managed to move a 26-metre long, nearly 9 metres wide, 106-wheel trailer, truck and an antique, 100-year-old timber boat from the tip of England to the top of Scotland and almost back again.

Councillor Rayner said everyone in town had reported an upswing in bookings since the Pride of the Murray left Echuca. Its journey generated so much interest in the region, we’ve all benefited, he said. In western Queensland, attracting more tourists is akin to good rain, it makes things grow, and the Pride of the Murray will attract potentially an extra 100 guests per day over the course of a season.

This means, that over the next five years, it will generate jobs and potentially inject an estimated extra 82 million into the region. Councillor Rayner said the Pride of the Murray was another significant addition to Longreachs impressive collection of Australia’s outback pioneering historical artefacts.

All of the Outback Pioneers’ immersive, award-winning and authentic experiences and accommodation including a sunset cruise on the Pride of the Murray, can be booked at www.outbackpioneers.com.au

Air NZ halves fares – which Jetstar pledges to undercut by 10%

Guide to get dental implants in Thailand

Cruise ships can be floating petri dishes of gastro bugs. Six ways to stay healthy at sea this summer