Technology that Powers Vivid Sydney Reveals Soul of the City 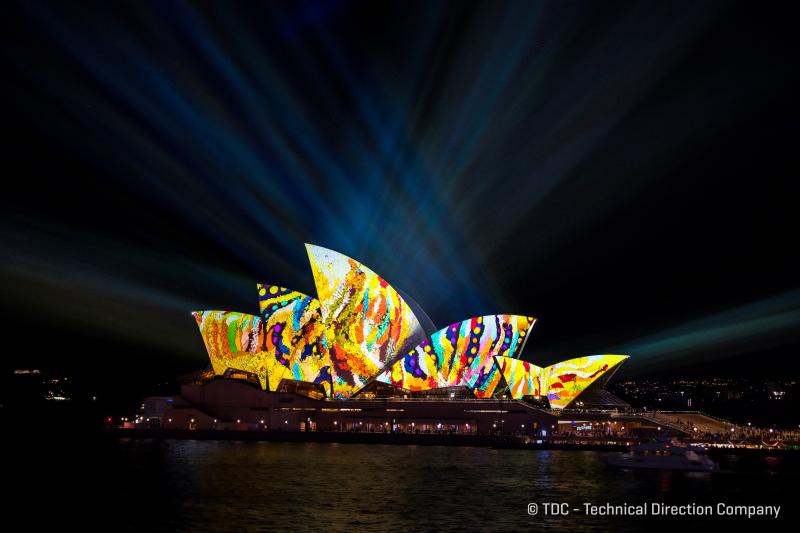 After a three-year hiatus, the results of the hard work from the TDC Crew of project managers, creative technologists, designers and engineers working behind-the-scenes at Vivid Sydney are now live.

Festival Director Gill Minervini, who directs her first Vivid Sydney in 2022, said: “For 12 years we’ve relied on TDC working behind-the-scenes to deploy the brightest, most powerful technology on a grand scale helping to reinvent Sydney’s urban landscape and using it as a unique and colourful canvas capturing the essence of Sydney’s soul.”

TDC is deploying 110 projectors across 27 sites. “Making sure that each installation is perfect to the exact millimetre is what we do at TDC,” explained Toby Waley, operations at TDC.

TDC has 30 video technical crew working on Vivid Sydney. Toby Waley said: “There’s understandably a lot more detail and fewer last-minute changes that can be made working in a post-pandemic environment.”

TDC is deploying the latest Barco laser projectors which shine exceptionally bright. Karl Johnstone, technical project manager at TDC said:  “With the added brightness uniformity and design we can configure them in different ways that better serve the imagery on the buildings. They are more compact, more heat and energy efficient, can be positioned in any configuration and produce a much brighter, bolder colour.”

With the scale and inventory across over 27 locations, TDC uses a RFID inventory tracking system at its warehouse. “It helps with logistics and keeps track of all equipment,” said Toby Waley.

TDC LiveView gives remote monitoring of each projection site as well as visitor status and wayfinding updates around the city. “This year, we’ve upgraded the image resolution for monitoring of all sites to 4K resolution,” said Drew Ferors, technical manager at TDC. TDC is controlling realtime information displayed at over 70 LED screens and display points to help with traffic flow and city operations.

TDC has provided the manpower, knowledge and technology across curious surfaces and Heritage listed buildings along the 8km Vivid Light Walk at Vivid Sydney. This year’s highlights include:

Barco UDX-4K high-brightness projectors are deployed for the 9,000 square meter sails for Sydney Opera House Lighting of the Sails to show Yarrkalpa – Hunting Ground, 2021 by Martu Artists and creative technologists Curiious revealing the Parnngurr community from the edge of the Great Sandy Desert in East Pilbara region, Western Australia.
Pylons of Sydney Harbour Bridge Sydney Harbour Bridge’s 90th Birthday
For the first time at Vivid Sydney, TDC is providing expertise and projection technology onto all four 89-metre-high by 58-metre-wide concrete and granite pylons supporting the iconic Sydney Harbour Bridge for Sharing the Same Life Essence by admired photographer, Wayne Quilliam in collaboration with Yakkazoo, Rhoda Roberts AO and Ignatious Jones. Sharing the Same Life Essence will be shown nightly on screens across the Vivid Sydney footprint at 5:55pm to 6pm (preceding the Sydney Harbour Bridge’s 90th birthday projections) as part of Vivid Sydney’s screening of the edited highlights of the First Light opening ‘Welcome To Country’ and performance that acknowledges First Nations culture.
Wayne Quilliam shares his thoughts on the significance of using video technology: “We have the fortune to transition from isolated tribal knowledge of the world’s oldest living culture to using video projection techniques as a way of sharing stories to a global audience. As an Australian Aboriginal photographer and storyteller, I’m immensely proud of what will be shown,” said Wayne Quilliam.
Technical Direction Company
New York Sunday
TDC Crew worked with creative studio Spinifex Group at three locations. For Sydney Harbour Bridge’s 90th Birthday, images from the Historical Archive and Digitisation Team at Transport NSW are shown on the entire surface of all four pylons of Sydney Harbour Bridge. For Sydney With Love shows the colourful ode to Sydney from painter Ken Done across the 32 by 18-metre façade of Customs House. Ninget Universe is a metaphoric, colourful interpretation of diversity and inclusion by 11-year old Luca French at the new location of ASN Co Building clock tower against a stunning city backdrop.
Jason French, creative director at Spinifex Group said: “We’ve worked with TDC for a decade and they are the very best in Australia. The team of experts always come up with trumps delivering first-class projections. At Vivid Sydney, we worked with TDC for the best possible scenario maximising the surface areas of the buildings for the artwork.”
Vivid House
At Vivid House in Darling Quarter TDC has provided a fully immersive 14 by 5 metre LED wall and interactive floor projection to showcase the artworks of five featured artists. “We relied on TDC to showcase mesmerising artwork that is morphed across the 360-degree LED walls and video floor projection combined with an authentic IOSONO immersive sound system and lighting array ensuring Vivid House transports visitors to another realm,” said Des O’Neil, ceo at AFX Global.
New York Sunday

TDC transformed the whole façade of the Museum of Contemporary Art with Helen Eager’s striking New York Sunday geometric 8-minute moving artwork. The MCA is a challenging project to work on because every year, the trees grow so the position of projectors needs to change.
Temple
Temple by Leilia Jeffreys is a monumental 3-channel film that will be projected on to tryptich using 7.4 by 3 metre wide TDC LED surfaces positioned over a reflective water pool that plays homage to native Australian cockatoos.
We Dream The City collective dreamscape at Powerhouse Museum
Crowded Cadmans
Who the heck is Billie Blue?
Smash
DJs at the Good Line
TDC’s creativity and ingenuity can also be witnessed at Point of View, at George Street, Corpi Celesti at Barangaroo, We Dream The City collective dreamscape at Powerhouse Museum, Crowded Cadmans at Cadmans Cottage, Who the Heck is Billy Blue? above William Blue Dining, Smash at Central Station and the Goods Line and there’s projection magic combined with amazing soundtracks at the new DJs at the Goods Line each night of Vivid Sydney.
Alex Rendell concluded: “You don’t visit once but it’s recommended that several nights are needed to take in the wonder and spectacle that Vivid Sydney has become.”