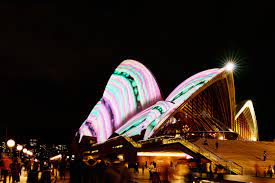 Spectacular, awe-inspiring photos of Vivid Sydney 2022 illuminating Sydney’s CBD skyline and Sydney Harbour have been released by global content creator Eugene Tan of Aquabumps.
Australia’s largest event and a celebration of creativity, innovation and technology, Vivid Sydney was captured for the very first time by Tan in his first ever professional night shoot of the city. The resulting content is a distinct departure from the trademark coastal photography Tan is globally renowned for and showcases the festival to a global audience following a two-year hiatus.
Minister for Enterprise, Investment and Trade, Minister for Tourism and Sport and Minister for Western Sydney said Vivid Sydney is back bigger and better in 2022.
“Vivid Sydney is back and I’m thrilled the 2022 opening weekend saw record numbers attend the festival. The action-packed program delivers a return to the excitement and adventure that we all need to feel again,” Mr Ayres said.
“Eugene Tan, one of our state’s best content creators, has collaborated with Vivid Sydney to showcase the festival in its beautiful splendour.
“His photos and video will help us spread the word and show the world why they need to come and experience Sydney at its creative best after dark.”
The Aquabumps Vivid Sydney content is part of a seven-week collaboration with the NSW Government to support its Feel New South Wales campaign. Among the Vivid Sydney program shot to be part of the series includes unique vision of the Sydney Opera House Lighting of the Sails, Australia’s largest ever liquid & light show Sydney Infinity at Darling Harbour, Crown Tower at Barangaroo’s inaugural activation The Gallery, and the largest laser installation ever seen at Vivid Sydney – Convergence, in the disused Goods Line railway tunnel.
The series will capture Vivid Sydney’s longest ever continuous Light Walk which stretches a record 8km from the Sydney Opera House to Central Station in 2022.
Aquabumps’ founder Eugene Tan said shooting Vivid Sydney for the first time was an exciting opportunity to do something new and showcase a different side to his home city.
“It’s not very often that I venture away from the coast but shooting Vivid Sydney was an experience I’ll never forget. To see the city and its icons – from the Sydney Harbour Bridge and Sydney Opera House to Darling Harbour – illuminated for Vivid Sydney was mesmerising and made for an epic creative challenge.
“I hope the images capture the brilliance of the festival and inspire people to go and witness the magic of Vivid Sydney for themselves,” said Tan.
Aquabumps’ Vivid Sydney imagery is part of a seven-week content collaboration with the NSW Government to support its Feel New South Wales campaign.
Visit visitnsw.com for travel inspiration and itineraries to make you #FeelNew and #FeelNSW.
For more information on Vivid Sydney including the full program, go to www.vividsydney.com. Get social using @vividsydney #vividsydney

Whales and Wildflowers Arrive on the Coral Coast, Western Australia 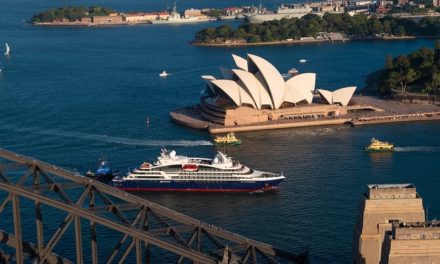 Outdoors and Rejuvenation One Hour from Melbourne