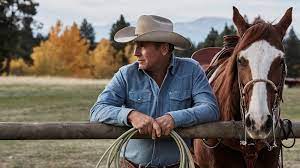 Legendary actor, producer, director and musician Kevin Costner, has been announced as the Calgary Stampede parade marshal, taking place on Friday, July 8 2022, to kick off The Greatest Outdoor Show on Earth.

Through his movies, music and most recently, Yellowstone, Costner is recognised as an individual who exemplifies western culture and tradition, mirroring the spirit of the Calgary Stampede.

Since 2018, Costner has portrayed John Dutton on the award-winning television show Yellowstone, currently in its’ fifth season of production. A modern-day western, the show is filmed in the rolling hills and Rocky Mountains of Darby, Montana, which is reflected in Costner’s love of western heritage and culture.

“I have a lot of fond memories of being in Calgary. It has made a big difference to me in my life to make Open Range and Let Him Go there. It’s one of the most beautiful spots,” says Costner.

“On July 8, I’ll be there, and I’m really honoured to be a part of what you have done for so long and carry on a tradition. See you at the Parade.”

Costner and his band, Kevin Costner & Modern West, will be performing at The Big Four Roadhouse following his marshal duties on the evening of July 8.

For over 35 years, Costner has been entertaining the world through his movies, television shows and music. He has starred in popular films such as Silverado, No Way Out, The Untouchables, Bull Durham, Field of Dreams, Dances with Wolves, Robin Hood: Prince of Thieves, The Bodyguard, Wyatt Earp, Tin Cup, Open Range, Draft Day, McFarland, USA, Hidden Figures, The Highwaymen, and Let Him Go.

Previous Calgary Stampede Parade marshals include Bing Crosby (1959), Bob Hope (1963), Walt Disney (1965), Wilf Carter (1984), Jack Palance (1997), Sam Elliot (1998), to William Shatner (2014) and many more. Past Marshals include many stars in the entertainment industry and have also recognised individuals for their remarkable personal achievements, such as Olympians, astronauts, mountain climbers and cancer survivors.

This year, more than four million guests are expected to don cowboy/cowgirl boots and feast on the infamous carnival fare at the Calgary Stampede, taking place from 8 – 17 July 2022.