The easing of travel restrictions across the APAC region has led to a clear increase in bookings, according to Trip.com data. Though the resurgence of the Asian travel and tourism sector will vary per market, encouraging signs of a rebound are starting to emerge, as restrictions are reduced and borders reopen across the region. A recent report from the Pacific Asia Travel Association (PATA) projected that international visitor arrivals into Asia will grow by 100% between 2022 and 2023, as demand peaks before returning to more normal growth rates over time. The latest figures from Trip.com Group certainly support this projection. From April 1st to May 5th, total orders made on Trip.com in the APAC region grew 54% year-on-year, a significant increase on March’s figures (which show a 22% year-on-year increase).
By analysing the latest Trip.com Group figures, it’s clear that increased consumer confidence is gradually returning to the sector, with many Asian markets seeing a recent surge in bookings. For the more in-depth market analysis, see below.
Thailand: Bookings Increase Ahead of High Season 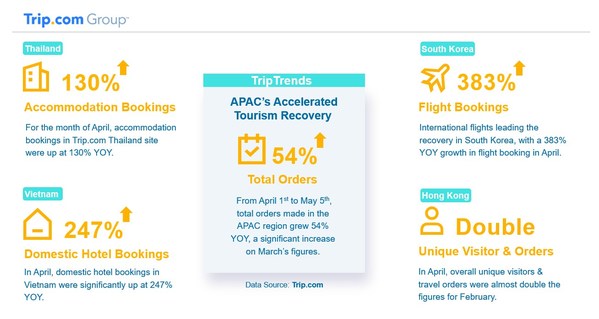 Thailand continues to scrap more inbound travel restrictions. From May, the country no longer requires fully vaccinated international visitors to take a COVID-19 test before flying, or upon arrival.
As restrictions ease, bookings are increasing. For the month of April, overall bookings (including flights, accommodation, car rental and tickets/tours) were up 85% year-on-year on Trip.com’s Thailand site. Standalone flight bookings increased by 73% year-on-year, with accommodation bookings significantly up, at 130% year-on-year.
On Friday, April 22, the day Thailand announced that COVID-19 tests from fully vaccinated inbound travellers would no longer be required, the number of Trip.com users viewing the country’s local hotels increased by 29% (compared to figures from the previous Friday), while domestic flight bookings on Trip.com grew by approximately 20%.
According to recent reports, the Tourism Authority of Thailand hopes to attract more than a million travellers per month during its upcoming high season, with visitors encouraged to self administer antigen tests during their stay rather than quarantine in a hotel. For April, inbound tourism to Thailand predominantly came from South Korea, Singapore, and Cambodia with a rise in customers from further afield expected in the coming months.
Hong Kong: Local Tours Resume
While Hong Kong recently experienced a fifth wave of the pandemic, this continued to recede in April, with many local tours resuming in the city and social distancing restrictions easing. Hong Kong’s residents eagerly await a return to normal life, with beaches and swimming pools reopening on May 5, and bars, nightclubs, karaoke rooms and cruises resuming operations on May 19.
Trip.com Group data supports encouraging signs of recovery in the market, with local accommodation bookings in April increasing by 6% year-on-year. Thanks to the further relaxation of travel restrictions – including social distancing policies and flight suspension rules – by the end of April, overall unique visitors and product orders on Trip.com (both domestic and international) were almost double the figures for February when Hong Kong was heavily hit by COVID-19.
Additionally, in May, non-residents are able to enter Hong Kong for the first time in over two years, with inbound tourism expected to increase incrementally, in addition to a predicted rise in staycations.
The Hong Kong Government is also looking to encourage and boost local consumption generally, as well as in the travel sector, and issued a new round of consumption vouchers in April, which can be used to book with Trip.com.
South Korea: International Flights Leading the Recovery
South Korea reopened on April 1, with fully vaccinated travellers now able to enter and move freely within the country without any quarantine measures. Positively, outdoor mask mandates are also being lifted in May, with international flights projected to increase, too.
The country plans to resume around half the number of pre-pandemic flights by year-end. FlightGlobal reported 420 weekly international flights into the country in April, just under 9% of pre-pandemic levels.
Trip.com Group data also proves that flights are leading the recovery in the market, with a 383% year-on-year increase in flight booking in April and a further increase of 39% in the same period for March. The number of users viewing flight products since March 1 has also increased by almost 150% year-on-year.
As the country continues to ease its international travel restrictions, we’ve also seen demand for international travel booming on Trip.com’s Korean site. Outbound flight bookings tripled in April, compared to February; and overseas hotel bookings also grew, by 60% and 175% in March and April respectively, when compared to February.
In terms of overseas destinations, the most popular international flight routes from Korea were to Vietnam, the Philippines, the US, Thailand and Indonesia, with cities like Ho Chi Minh City, Manila, Hanoi, Bangkok and Da Nang ranking in the top five getaway destinations for Korean travellers.
Vietnam: A Strong Domestic Tourism Market Bolstered by International Flights
Vietnam fully reopened its borders to international travellers on March 15. As a result, the country has seen a substantial rebound in tourism, with international visitors to Vietnam in April reaching 101,400 arrivals, more than five times higher than the same period last year.
The appetite for domestic travel has also surged. Trip.com Group data shows that domestic hotel bookings in the country are up 247% year-on-year compared to 2021.
International flight bookings have also seen a marked increase thanks to the easing of restrictions, with 2022 figures showing a 265% uplift on figures from 2021. Though visitors must still obtain a negative COVID-19 test result before departure, a 15-day visa exemption is in place for arrivals from 13 key nations (including Japan, South Korea, France, Spain and the UK) which hopes to further stimulate recovery.
By 2022, the most popular flight routes into Vietnam come from South Korea, Thailand, Japan, Singapore and Malaysia, according to toTrip.com data.
Summary
Trip.com Group’s data on the current status of the Asian market is certainly encouraging, with interest and bookings increasing and consumer confidence on the rise. As summer approaches, a report from Skyscanner, also a Trip.com Group sub-brand, suggests that many international travellers want to spend more and travel further to make up for a lack of travel during the pandemic, with many thinking ahead to high season and visiting the APAC region for vacations.
Edited by Administrator 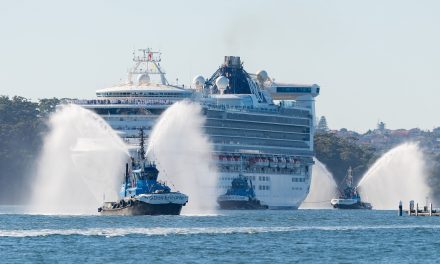