During summer in Canada, the snow and ice give way to sun, fun and festivities. Read on for six of the best upcoming events, from coast to coast.
Luminato, Toronto
Taking place from 9 – 19 June 2022, the Luminato Festival “was born out of the cultural and creative energy of the city of Toronto” and harnesses that energy by turning theatres, parks, and public spaces into homes for art. This international arts festival is dedicated to performance, media and visual arts, and programming that cuts across traditional artform boundaries, working closely with Canadian artists to support the development and creation of distinctive new work as well as presenting today’s most exciting artists from around the world.
Bluesfest, Ottawa
From 7 – 17 July 2022, RBC Ottawa Bluesfest will feature world-class acts including Jack Johnson, Alanis Morissette, Alessia Cara, Crash Test Dummies, Garbage and Sarah McLachlan. This epic outdoor music festival has gone beyond its blues roots to increasingly showcase mainstream pop, hip hop, reggae and rock acts. Click here for the full line up.
Calgary Stampede, Alberta
Don’t miss out on the world-renowned Calgary Stampede, the place where hides are raw, hearts untamed, and the world’s toughest rodeo stock walk on two legs. From 8 – 17 July 2022, more than 4 million guests will don cowboy/cowgirl boots and feast on the Stampede’s infamous carnival fare. The Calgary Stampede is as much about the music as it is about rodeo. Previous line-ups included Katy Perry, Keith Urban, Nelly Furtado, Ben Harper, KISS, and the Dixie Chicks. This year’s line-up will be announced soon.
Festival d’été de Québec
Is 11 days enough time to explore 300 shows and 10 stages? Find out at the Festival d’été de Québec from 7 – 17 July 2022. As the festival takes over the historic district of Quebec City, you’ll be treated to world-class musical acts, including Rage Against the Machine (full line-up to be announced shortly). Every year, the Festival d’été de Québec attracts over one million festival-goers to Québec City’s historical district for concerts by international superstars and top new talent. Don’t forget to check out the street performers and night festivities too!
Just For Laughs, Montreal

Every summer, the largest comedy festival in the world tickles Montreal into a laughing frenzy with galas, street art, theatre productions, and stand-up performances. Hosting more than 1,700 artists from 19 countries as well as over 2 million festival-goers, Just For Laughs offers 1,600 performances, including 1,200 free outdoor shows. The festival runs from 13 – 31 July 2022.
Adäka Cultural Festival, Yukon Territory
Visit the Yukon from June 29th – July 5th 2022 for the Adäka Cultural Festival, when more than 150 aboriginal artists and performers will congregate in the capital city of Whitehorse to share their arts and culture during this week-long event. The banks of the Yukon River offer the perfect backdrop to this world-class festival, hosted at the Kwanlin Dun Cultural Centre. Immerse yourself in the traditional and contemporary music, and sign up for a workshop to try your hand at drumming, dance, storytelling, film, visual art exhibitions, interpretive programming, and community feasts.
Note for all travellers:
We encourage all travellers to be fully informed of the pre-entry and on-arrival public health and testing requirements both federally and provincially. This includes the mandatory use of the ArriveCAN app. For the latest information on travel to Canada please visit the Government of Canada website.
GETTING THERE
Air Canada offers direct flights to Vancouver from Sydney. From early May 2022, Air Canada’s Sydney – Vancouver flights will ramp up to daily. From 6 June to 5 September (Monday, Thursday and Saturday) Air Canada will increase its service to twice daily from Sydney to Vancouver. From 3 July 2022, Air Canada’s Brisbane – Vancouver direct flights will resume four times per week. Direct flights from Sydney to Vancouver are also available on Qantas.
Internal flights are available throughout Canada from all major cities, in addition to VIA Rail train service.
www.keepexploring.com.au 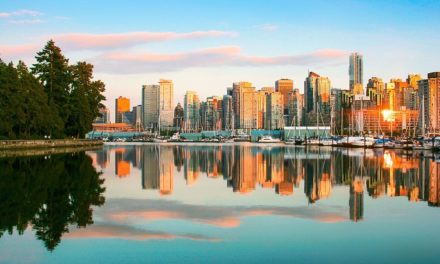 The MICHELIN Guide sets its sights on Vancouver, Canada