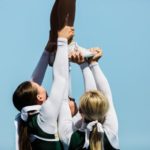 For the 26th year, Varsity Spirit’s National Cheerleaders Association (NCA) and National Dance Alliance (NDA) Collegiate National Championship returns to Daytona Beach on April 7-9 boasting a record turnout of teams and participants. In competitions based at the Daytona Beach Bandshell and the Ocean Center, the nation’s top universities will be vying for the title of NCA & NDA Collegiate National Champion in the single largest collegiate cheer and dance event in the world.
More than 8,000 participants and 355 teams from colleges across the country will be competing for the coveted golden trophy with approximately 15,000 spectators expected, all record numbers for the annual event that relocated to Daytona Beach back in 1996. Teams will be utilizing 29 hotels in the area and 14 buses that will provide city-wide transportation.
“Daytona Beach has become the premier destination for our NCA & NDA college customers across the country.  This much-anticipated event has grown in popularity every year, and we are thrilled with the turnout this year as the largest event ever,” said Bill Boggs, Sr. VP and Director of College Programs for NCA & NDA.  “Daytona Beach has become synonymous with NCA and NDA, and one of the most recognized cheer and dance venues in the world. It’s truly an honor to provide a world-class event where we can recognize these young student athletes for their hard work, dedication to their universities and talent.”
In addition to competing at the Daytona Beach Bandshell and the Ocean Center, competitors, along with their coaching staff and family and friends, will be able to enjoy all that the Daytona Beach area has to offer during their visit.
“Daytona Beach is proud to continue to serve as the host city to the NCA & NDA Collegiate Cheer and Dance Championship,” said Daytona Beach Area Convention and Visitors Bureau Executive Director Lori Campbell Baker. “This premier event continues to grow every year and is a positive impact to our local economy. This destination is the perfect backdrop for the competition, providing competitors and their families high-quality accommodations, inside and outside venues that are in close proximity to each other and a wealth of activities to enjoy during their stay.”
“Each year, we look forward to welcoming the NCA and NDA Collegiate National Championship, as it has become one of our areas largest and most well-known events” said Ocean Center Director Tim Riddle. “We appreciate the long partnership with NCA/NDA and the continued opportunity to host the many dedicated athletes as they compete for national recognition.”
The NCA/NDA Collegiate National Championship is open to the public and will be live streamed on Varsity TV. For more information about the event and to purchase tickets, visit https://www.varsity.com/nca/school/competitions/college-nationals/.

Find What You’ve Been Missing This Summer in Vail, Colorado