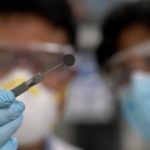 Batteries are a travel essential – as well as being essential to almost everything else – and now, in an Australian breakthrough, faster-charging and more sustainable batteries with a life up to three times greater than lithium ion are being built in Brisbane with Aussie-developed technology.
Airlines will be relieved to learn that the revolutionary new batteries are also safer, because they do not use lithium, which has been known to cause fires in some mobile phones (including a few while airborne) .
Brisbane-based Graphene Manufacturing Group (GMG) has advised that a pilot production and testing plant for its graphene aluminium-ion batteries (“G+AI Batteries”) is operational and that the first G+AI Batteries in coin cell format have been manufactured. Additional equipment to enable the manufacture G+AI Batteries in pouch pack cell format is expected to arrive in early 2022.
Technology developed at The University of Queensland (UQ) lies at the heart of the process. CMG will manufacture battery prototypes for watches, phones, laptops, electric vehicles and grid storage under a research agreement with scientists from UQ’s Australian Institute for Bioengineering and Nanotechnology (AIBN).
Professor Michael Yu, Dr Xiaodan Huang and postdoctoral student Yueqi Kong devised technology to make graphene into more efficient electrodes for powering batteries, which has been patented and licensed by UQ commercialisation company, UniQuest.
AIBN Director Professor Alan Rowan said UQ was delighted to partner with GMG to translate scientific ideas into commercial solutions through the development of more efficient and greener batteries.
“After several years of dedicated research into improving the aluminium ion battery, we are excited to be at the phase of developing commercial prototypes for more sustainable, faster-charging batteries,” Professor Rowan said.
“Testing showed rechargeable graphene aluminium ion batteries had a battery life of up to three times that of current leading lithium-ion batteries, and higher power density meant they charged up to 70 times faster.”
“The batteries are rechargeable for a larger number of cycles without deteriorating performance and are easier to recycle, reducing potential for harmful metals to leak into the environment.”
UniQuest chief executive Dr Dean Moss said the aluminium ion battery with graphene electrodes could transform the existing rechargeable battery market, dominated by lithium ion.
“Lithium-ion batteries demand the extraction of rare earth materials using large amounts of water and are processed with chemicals that can potentially harm the environment,” he said.
“This project has real potential to provide the market with a more environmentally friendly and efficient alternative.”
GMG Head Scientist Dr Ashok Nanjundan said the project could deliver far-reaching benefits for energy storage, while the batteries were also safer because they do not use lithium, which had been known to cause fires in some mobile phones.
(That should be of interest to quite a few airlines!)
“This project is a great example of academia and business working together,” Nanjundan said. 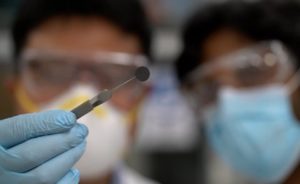 “The current recyclability of batteries is highly problematic due to their chemical properties and the stockpiling of dead batteries presents a large and looming environmental and public safety concern.”
GMG chief executive Craig Nicol said to use local raw materials to manufacture battery cells at a competitive cost to replace imported lithium-ion cells is a massive opportunity for GMG and Australia to reduce supply chain risks and create local jobs.
“We’re excited about developing the commercial prototypes followed by initial production here in Australia – at a location yet to be determined,” he said.
UQ’s research team was awarded $390,000 over three years to develop the graphene aluminium ion technology from the Australian Research Council’s Linkage Project in 2020.
CMG has announced that subject to successful commercial prototypes and a final investment decision, it aims to construct an initial commercial coin cell G+AI Battery manufacturing facility, followed by first production and sales of G+AI Batteries.
A CMG statement said: “The location of this manufacturing facility is not yet decided but will likely be in Australia where GMG’s headquarters and existing operations are located. As previously announced on the 25th October 2021, GMG and Robert Bosch Australia Pty Ltd (“BOSCH”) have signed a non-binding Letter of Intent, with the aim to agree on the terms of binding agreements for BOSCH to design and deliver this manufacturing facility.”
Laboratory testing and experiments are said to have shown so far that the Graphene Aluminium-Ion Battery energy storage technology has high energy densities and higher power densities compared to current leading marketplace Lithium-Ion Battery technology – which means it will give longer battery life (up to three times) and charge much faster.
In short, compared with lithium-ion batteries:

Who knows the future applications of such technology, as the world moves towards sustainable energy sources and battery storage to help decarbonise industry and wean ourselves off fossil fuels?
Edited by Peter Needham

Sustainability in everyday hotel life: a look behind the scenes

Queen of the Skies sunk in ocean underwater theme park