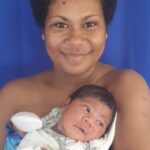 This donation represents a significant portion of the overall cost of fixing leaks in the corridor roof, which has contributed to flooding of the walkway in recent years.

Mr Myrmell said it was also heartwarming to see that Ni Vanuatu people living abroad were among the people who have contributed to the project.

“Our ships cannot visit Vanuatu at the moment due to the covid situation but the people of Vanuatu are always very close to the hearts of our guests,” Mr Myrmell said.

“The P&O Pacific Partnership donation to the ‘Giving Hands Vanuatu’ fundraising campaign gives our guests another opportunity to show how much they care for the people who make them feel so welcome when they cruise to Vanuatu’s beautiful islands. 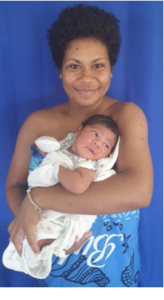 “I know that our guests would take the view that newborns deserve the best possible start in life and it is good to know that the corridor roof can be repaired for the benefit of the mothers and babies and their visitors.”

Ms Jacobe thanked the P&O Pacific Partnership and the cruise line’s guests for the welcome donation for the hospital project. She said ‘Giving Hands Vanuatu’ would be assisting with other local needs as they become known.

“We have begun other projects at Vila Central Hospital such as water blasting corridor walkways, fixing sinks, cleaning the ward bathrooms and handwashing stations, replacing windows and louvers in the wards and we have had a team of plumbers repairing the plumbing,” Ms Jacobe said.

The P&O Pacific Partnership is funded from a one dollar contribution on each guest booking with a number of projects supported in Vanuatu in recent years.

Norwegian not in a race to fill ships to 100%

Paul Gauguin Cruises Announces 2020 Voyages in Tahiti, French Polynesia, & the South Pacific with a return to Fiji and Bali