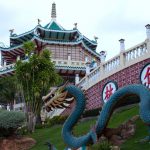 Cebu, the Philippines’ oldest and second largest city is on a roll, enjoying an economic ‘Ceboom’ (as the locals call it) and gearing up for a very significant birthday.

Situated well south of Manila at the hub of the nation’s central Visayas Islands, the Philippines’ ‘Queen City of the South’ will celebrate its 500th anniversary in early 2021. But, until then, what’s there to do in Cebu? In short, plenty. Specifically, good food and brews, plus history galore and islands to escape to.

In downtown Cebu, the grand Basilica del Santo Nino, founded in 1565, is the oldest church in the Philippines. In its adjacent plaza sits Magellan’s Cross, commemorating Portuguese-born, Spanish navigator Ferdinand Magellan, the first European to land in the Philippines. Like the basilica, the cross has become a pilgrimage site for folk praying for miracles. Magellan would appreciate the irony, given that he was in great need of a miracle very soon after landing in Cebu — as we shall see.

The Spanish colonisers who followed Magellan left, among other things, churches and forts, surnames, a language and mansions. Two of those Cebu mansion-cum-museums are truly worth a visit. Museo Parian Sa Sugbu mansion, also known as “the Jesuit House”, dates back to 1730 and echoes with stories of Mestizo clans and Spanish padres. This extraordinary mansion sat hidden for decades within a huge hardware shed that, for some curious reason, was constructed around it. 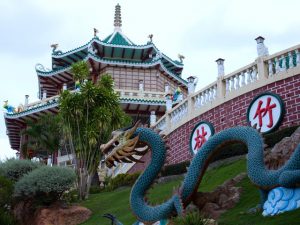 Elsewhere in mid-town Cebu, the younger mansion Casa Gorodo has beautifully restored rooms where the creak of ironwood floors and the rustle of lace curtains whisper tales from the 1850s — think traders, serenaders, mantillas, maiden aunts, and such.

Downtown Cebu is always busy so a journey to the hills is an opportunity for some breeze and a good overview. Up here you’ll find an ornate Chinese Taoist temple near the exclusive enclave of Beverley Hills. Dragons, ponds and pagodas make this a slightly kitsch but peaceful retreat.

Also in the hills is a wondrous folly, the Temple of Leah, a full-sized, mock Greco-Roman temple. Built on a mountainside by a business mogul to honour his late wife, named Leah, this Pinoy Parthenon has become a major tourist attraction. Nicknamed ‘Cebu’s Taj Mahal’, it delivers fine views of the city, not to mention of the ‘temple’ centrepiece, a gilded, Madonna-esque statue of the seated, departed Leah.

By now you’re probably thirsty and/or hungry. For the former, head to one of the Bo’s Coffee outlets dotted through the city, with the stylish flagship store being located on Ozmena Street. This home-grown chain puts franchised foreign froth-shops to shame. Bo’s knows, for instance, what an actual macchiato is, and then serves it very well. Free WiFi and excellent mango cheesecake, too.

Hungry? Try the local specialty, Lapu-lapu fish. Named after a famous local warrior, it is also known — as Filipino children joke — as ‘the fish that killed Magellan’. Other basic Filipino favourites include pork crispy pata, chicken adobo and sinigang sour soup. For finer dining, head to Circa 1900 restaurant, established in a restored, turn-of-the-century mansion where good wines and international cuisine are matched with Filipino delicacies. 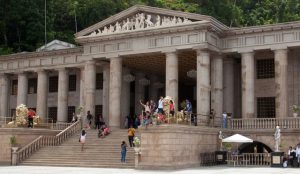 Just across the bridge from Cebu is Mactan Island where Magellan first set foot. He promptly laid claim to the entire Philippines on behalf Spain’s King Phillip II — a swoop of hubris for which he soon paid a hefty price.

Here he encountered local boss warrior, Lapu-lapu who thought the conquistador’s ambit claim was an archipelago too far. Without further ado, he slew Magellan. Thus the fish joke. At the site of Magellan’s landing (and departure) stands a large, muscular statue of Lapu-lapu with a plaque hailing him as ‘The first Filipino to have repelled European aggression.’

‘Unfortunately, we killed our first tourist,’ says my guide who then delivers me to Mactan Island’ fine seafront Crimson Resort where my welcome is decidedly more friendly than Ferdinand’s.

Less than two years away, the Philippines are gearing-up for the nation’s big, half-millennium birthday bash. With the King of Spain due and possibly even the Spanish-speaking Pope, the local spin-doctors are working hard on how to celebrate the irony that the glorious ‘discoverer’ didn’t survive his own discovery. Predictably, the party will be so good that Magellan himself would surely be flattered.

Is it Safe to Travel During the Variant Spread?

JOHN ROZENTALS declares a love for tempranillo … and reckons the red variety is established enough here to be regarded as mainsteam.