50 Routes in 28 Countries – Including Six in Australia

Lace up your running shoes all over the world this August, with the publication of Lonely Planet’s Epic Runs of the World. 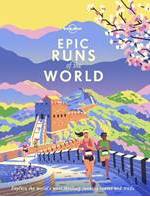 Epic Runs of the World showcases 50 incredible routes in 28 countries, from Kenya to Canada, plus a further 150 suggestions.

Featuring everything from short city runs and cross-country trails to must-do marathons and long-distance ultras, each experience is defined by being truly epic – whatever your fitness level.

“Running now has a surprisingly symbiotic relationship with travel itself,” Lonely Planet says.  “Experienced vagabonds insist it cures jetlag, while running seems to be the one exercise we actually do when travelling, whether for a short business trip or during a round-the-world adventure.”

Lonely Planet adds that, “the 50 featured runs are first-hand accounts, written by people who are not only passionate about running – some even do it for a living – but also about the idea that to have run somewhere is to know it. These are stories that will convince you there are times when a run is the way to see a place.”

How to Use Lonely Planet’s Epic Runs of the World

Each of the five chapters in this book includes a special collection of runs from that particular region, from easy-access park runs and city loops to iconic marathons and epic ultras. A colour-coded key on the contents page will help you identify which are easy, which require serious fitness and fortitude, and which fall somewhere in between (based almost entirely on distance and elevation gain). Accompanying each main story is some practical information to help you follow in the author’s footsteps. The authors have also included three extra routes or races that have a similar character to their featured run, but may be closer to home or more accessible.