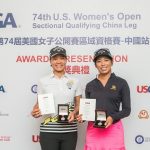 Thai Prima Thammaraksand Chinese Taipei’s Babe Liusecured their places in the field for this month’s US Women’s Open when they were the top-two finishers in a one-day, 36-hole sectional qualifier held for greater China.

With only two spots on offer to the year’s second Major, teeing off May 30 in Charleston, South Carolina, Thammaraks (68-71) and Liu (70-69) tied for top spot on five-under 139 over the Old Course at the Hong Kong Golf Club, a Golf Course Facility Member of the Asian Golf Industry Federation.

With wet and windy conditions adding to the challenge on a gruelling day for the 44-player field, Liu and Thammaraks escaped a three-way play-off for the two spots when China’s Zhang Weiwei (68-72) imploded on her final hole.

The Hubei native was tied for the lead with Thammaraks at four-under following the morning round and was leading at six-under going into her final hole (the 513-yard par-five ninth) of the second round. But Zhang lost a ball as she ran up a double-bogey seven to drop into a tie for third with Chinese Taipei’s Peng Chieh (72-68).

“I was getting ready to go to the play-off. When someone said there was no play-off I was really happy,” said Bangkok native Thammaraks who won the 2017 Xiamen Orient Masters on the China LPGA Tour. The Iowa State graduate finished with nine birdies and four bogeys over the day.

“Everybody wants to play the US Open. It’s one of the biggest Majors for ladies golf. I’ve been trying to qualify every year since I went to college, so that’s eight years already. I finally got through! This is a really big deal.” 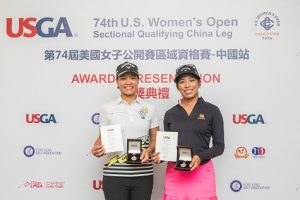 Liu, who will make her second US Women’s Open appearance have played in the 2015 edition when she finished in the top three on the China LPGA Tour money list, carded three birdies over her final five holes to qualify.

“I don’t want to hide my good feelings. Definitely I am super happy with this. Last time I didn’t play well [at the US Women’s Open where she missed the cut]. My minimum goal is making the cut this time,” said the 26-year-old Taoyuan native, a three-time winner on the China LPGA Tour.

Despite missing the chance to play in the US Women’s Open for a second time after qualifying in 2017, Zhang was positive about her experience, despite the disappointment of her final hole, where her three-wood second shot bounced off the cart path and couldn’t be found.

Tommy Tangtiphaiboontana, USGA Director, International Competitions, said this was the most spots the body had offered for a qualifier in the greater China area and the quality of the field warranted the two places.

In recent years, the qualifiers had been held in Shanghai. However, moving to Fanling during the week of the EFG Hong Kong Ladies Open that starts on Friday made sense.