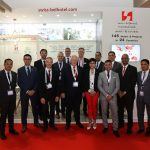 Swiss-Belhotel International, the global hospitality management chain, has concluded a highly successful four-days at the Arabian Travel Market (ATM), where it updated the Middle Eastern travel trade on its impressive plans for global expansion, brand development and environmental sustainability.The company sent a high-level delegation to ATM, which took place in Dubai from 28th April to 1st May 2019 and was attended by over 39,000 travel professionals, government ministers and media. The group’s presence was led by Gavin M. Faull, Chairman and President, Matthew Faull, Senior Vice President of E-Commerce, Distribution & IT, and Laurent A. Voivenel, Senior Vice President, Operations & Development for the Middle East, Africa & India.

From a prominent booth on the main show floor, Swiss-Belhotel International’s executives revealed the company’s latest global expansion strategy, including the goal of reaching 250 hotels and 50,000 rooms worldwide, either in operation or under development by 2022. The group currently holds a portfolio of 145 hotels and projects spread across 24 countries.

“We are seeing an excellent growth momentum across our portfolio of brands, with owners increasingly wanting their hotels to be managed by an international brand which is different from large international hotel companies,” Mr. Faull said. “We will continue to strengthen and develop our various brands while maximising returns for owners and accelerating growth in emerging countries, as they get easier to reach with greater global accessibility and connectivity.”

This rapid expansion has already started; 2019 will be a significant year for the company, with 28 new hotels scheduled to open. This growth will cover a wide range of global destinations, including the Middle East, China, Southeast Asia, Europe and Oceania. 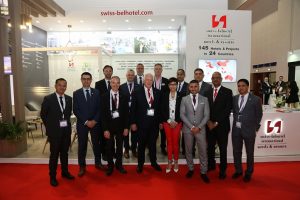 Also at ATM, Laurent A. Voivenel participated in a panel discussion to address the critical issue of reducing the industry’s carbon footprint. In front of a large audience at the ATM Inspiration Theatre, Mr. Voivenel emphasised the importance of being energy efficient and using renewable resources. He also revealed that Swiss-Belhotel International is working to make all its Middle Eastern hotels carbon neutral in the coming years.

Keen to reward the travel trade for their enduring support, Swiss-Belhotel International used ATM to launch a series of exciting packages for wholesalers and tour operators. Targeted at Middle East travellers, these offers included special golf packages in Indonesia and Vietnam, discounted wholesale rates in Australia and New Zealand, early bird discounts in Australia, and free room upgrades in the Philippines.

Swiss-Belhotel International will continue to attend the world’s largest B2B shows in future, as part of its commitment to working with the travel trade globally.