QF Flights From Australia Direct To FCO Take OffOakwood Premier Melbourne Confirming Its Luxury StatusLongreach Now One Of Australia’s Largest Cruising PortsBeyond Times Square Presents Luxury History Tours in BostonExperts Warn Travellers to Be Vigilant of ScamsSydney is One of the Best Cities for Baby-Boomers to Live in and VisitNEW 15-Day Tour of the Galapagos, Amazon & AndesTravel & tourism deal activity registers marginal growth of 1.4% in May 2022,Qantas To Expand PER Gateway With Flights To JNB And JKTViking Marks Float Out Of Newest Ocean Ship
New study reveals just how deadly the biggest mountains in the world really - Global Travel Media

Ever wondered how many people make it to the top of the biggest mountains in the world? And how many don’t?
It’s not just the minus 40-degree conditions, sheer ice faces or high altitude that makes these peaks challenging, it’s also very strong winds, exhaustion from months of trekking and sheer stubbornness from climbers that contribute to so many that perish, and it’s often on way back down from the top.
Outdoor clothing retailer TOG24.com crunched the numbers on the ten biggest mountains in the world to discover which one takes the crown for most dangerous. As well as being extremely challenging, they are also out of reach financially for most people, as the cost to ascend these peaks with guides and permits ranges from €9,000/ $10,000 to over €41,000/ $44,000.
TOG24.com looked at the height of each mountain, the total number of climbers, the coldest recorded temperature and the total number of deaths to score each mountain out of 100 for danger. 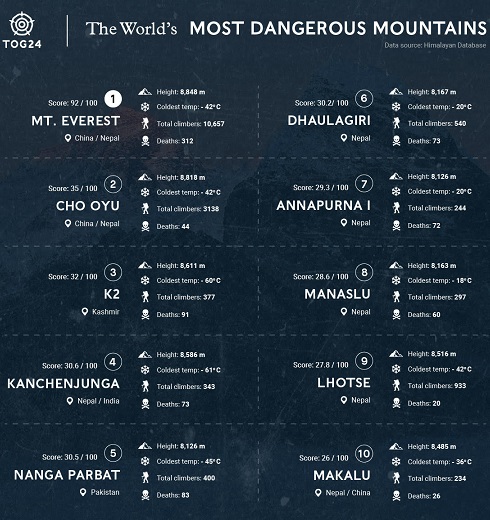 How dangerous are the biggest mountains in the world?
10. Makalu, Nepal and China. 26/100
Technically the safest of the largest mountains to climb, Makalu is actually the fifth highest mountain in the world at 8,485 meters. A four-sided pyramid shape, Makalu lies 12 miles from Mount Everest. Reaching a bone-chilling minus 36 degrees at the summit, 234 brave people have reached the top. Sadly 26 people died trying to complete what is considered to be one of the most difficult climbs, as reaching the top involves difficult ice climbing. Combine this with extreme weather like strong winds and it’s no surprise a relatively small number of people have conquered this beast of a mountain.
9. Manaslu, Nepal. 28/100
Probably the most controversial mountain on the list, due to the fact it has been difficult to get climbers to prove they reached the summit. Manaslu lies 8,163 meters high, and many people have photos of what they claim to be the top, when experts have disagreed. The true summit is a steep snow-covered ridge, which many climbers seem to make the honest mistake of missing due to its hidden position. Tragically, 60 people have died trying to climb Manaslu, so it’s still quite the challenge, wherever you end up.
8. Lhotse, 27.8/100
933 people have climbed this 8,516-meter high peak, with 20 people dying whilst trying to complete the challenge. Connected to Everest, Lhtse is considered slightly easier, but still no mean feat. Temperatures have been known to dip to minus 42 degrees so this climb needs the same preparation as Everest would.
7. Annapurna 1, Nepal. 27.9/100
The first eight-thousand-meter peak to be climbed back in 1950, Annapurna 1 stands 8,126 meters high. This mountain holds the claim for the highest death rate, as only 244 people have climbed and 72 of those perished while doing so. Reaching temperatures of minus 20 degrees, it remains covered in snow all year round. Couple this with high winds and you’ve got a tough challenge for even the most experienced climbers.
6. Dhaulagiri, Nepal. 30.2/100
Located in North-central Nepal, this mountain is the seventh highest in the world and is considered a technical climb. With a crest that stretches for 30 miles, it is nestled against the world’s deepest river, which runs between Dhaulagiri and Annapurna 1. To date, 540 people have reached the summit, and 73 have lost their lives. In April 2022, a top Greek Alpinist lost his life as he fell ill on the descent.
5. Nanga Parbat, Pakistan. 30.5/100
400 climbers have tackled the ninth highest peak in the world, but it has earned the nickname of the killer mountain due to the 83 people who have lost their lives. Rivalling K2 for technical difficulty, Nanga Parbat stands prominently above other terrain leaving it open to the elements. Climbers say it is just as hard to climb in summer due to the weather, and probably due to the fact it comes complete with a 15,000-foot single wall of rock and ice that is considered the highest face in the world.
4. Kanchenjunga, Nepal and India. 30.6/100
Third highest in the world, only 243 people have reached the 8,586-meter summit, with 73 people sadly dying. A 50-year-old climber from India was the latest victim in May 2022, as he collapsed before reaching the final stages. Guides say he refused to turn back and died from exhaustion. History was made recently by the first Pakistani climber Shehroze Kashif, to summit Kanchenjunga, who also takes the claim to be the youngest to do so, at just 20 years old. He also holds the record for being the youngest climber of both Everest and K2.
3. K2, China and Pakistan 32/100
Also known as Mount Godwin-Austen, many climbers wonder if K2 is deadlier than Everest. Although it’s been beaten to the top spot in this list, the fatality rate is significantly higher due to the fact a lot fewer people have made it to the top of K2. 377 compared to over 6,000 for Mt. Everest. 91 people have lost their lives trying to conquer this second largest mountain in the world, and it’s mainly down to the volatile weather. High winds and well below freezing temperatures make K2 a very difficult climb.
2. Cho Oyu, Nepal 35/100
Although this is considered to be the easiest eight-thousand-meter mountain to climb, don’t let that fool you into thinking it could be like a walk-up Ben Nevis. The altitude alone makes it extremely challenging and climbers still lose their lives here every year. Over 3000 people have made it to the summit, and there have been 44 fatalities. You’d need to set aside ten weeks to climb Cho Oyu, and this coupled with the snow and ice can cause extreme fatigue. But even so, many climbers see it as a stepping stone to experience climbing Mount Everest.
1. Mount Everest, Nepal 92/100
Taking the top spot for the most dangerous mountain in the world is also the highest, Mount Everest has seen over 10,000 people summit, but over 300 people have lost their lives trying to complete the challenge. Its latest victim, Russian climber Pavel Kostrikin, collapsed and died of altitude sickness at Camp I, in May 2022. Over a third of climbers turn back on their mission, as it takes up to two months to climb Everest, compared to six to nine weeks for K2, meaning exhaustion and altitude sickness are common. The danger of this mountain seems to be exactly what attracts so many people to it, even though they know once they reach the top, there is still a high chance of something going wrong on the way down. Even with its reputation, it’s common for climbers to have to queue for up to 20 mins in a crowd to reach the top.
Edited by: Jill Walsh

So, what Is happening with test cruises in 2021 in the USA…and even Australia?

When Do You Need Travel Security?