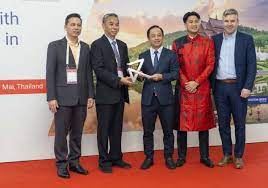 Routes Asia, which is held in a different location each year, brings together airlines, airports and tourism authorities to discuss air service strategy and future networks. Half of the region’s new air services are connected to meetings at the event.
As the only route development event dedicated to the Asia Pacific region, Routes Asia 2023 will facilitate conversations that will drive recovery and future growth for Asia’s route networks.
Chiang Mai is the cultural heartland of Northern Thailand. The destination’s strategic location and a strong economy have contributed to its growing importance as an international hub.
Located 700km from Bangkok, Chiang Mai is the largest city in the north of Thailand in terms of economic scale and population. Due to its distinct cultural heritage, nature, beautiful scenery and hospitality, Chiang Mai is popular among tourists and welcomed almost 10 million visitors a year pre-pandemic.
Chiang Mai is internationally recognised as one of Thailand’s most distinctive cities and a preferred destination for conferences and exhibitions. It is Northern Thailand’s hub for medicine and education, and the city has enhanced its profile to host many international conferences ranging from small events to conferences hosting over 8,000 delegates from various professional fields.
With almost 74,041 flights and more than 9.98 million passengers in 2017, Chiang Mai International Airport serves as the major gateway to the scenic beauty and rich culture of Northern Thailand. It also plays an important role in promoting travel and tourism throughout the northern region of the country.
Speaking at this year’s Routes Asia, Steven Small, director of Routes, said: “Substantial and continuous infrastructure development, together with state-of-the-art conference facilities, have positioned Chiang Mai as a premier MICE centre destination, making it the perfect location for Routes Asia 2023. The event will provide a unique opportunity for the city to showcase the significant infrastructure developments to the region’s leading aviation stakeholders.”
Airports of Thailand, said: “Routes Asia is essential to rebuilding route networks across the region. AOT is looking forward to being a part of further carrying this momentum by hosting the Routes Asia 2023 event in Chiang Mai.”
Routes Asia will take place on 14-16 February 2023.