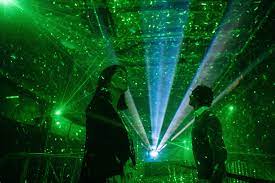 As Central Station and The Goods Line join Vivid Sydney for the first time, historic landmarks are transformed into atmospheric hubs for light installations, live music and more. Here, you can catch legendary DJs every night from 6pm, experience Vivid Ideas events at the Powerhouse Museum and University of Technology Sydney and refuel at memorable nosh spots along the way.
Getting there
Central Station is on George Street at the southern end of the Sydney CBD and is one of the city’s major transport hubs. You can get there by train, bus or light rail from all over the city. The start of The Goods Line is just a five-minute walk from Central Station towards Ultimo and it runs for 800m to Darling Harbour. There are light rail stops along most of the route.
Highlights not to miss include:
Convergence, by Mandylights
The largest scale laser installation in Vivid Sydney history–with more than 100 custom-made laser units–create a spectacular, immersive visual experience. The unused Goods Line tunnel becomes a portal to a spectacular convergence of lights, lasers and smoke effects that will leave guests wondering where the tunnel leads and what they’ll discover as they journey deeper underground.
Vivid Reflections, by The Electric Canvas
This interactive projection uses motion capture technology to turn your movements into animated action, then beams them onto the landmark clock tower. You’ll be transported, in fantastic and unexpected ways, to the places that make Sydney unique, from Bondi Beach to exploring Sydney’s amazing cultural diversity, or becoming one with the city’s nightlife.
We Dream the City, by Essem Projects
As you stroll along The Goods Line, the back wall of the Powerhouse Museum comes alive with animated vision of Sydney’s streets through time, creating a 130m-long meditation of the forces that have shaped Sydney. This moving mural uses footage from the ABC, the National Film and Sound Archive of Australia, the former Maritime Workers Union, the Transport for NSW Historical collection and more.
Frankly, My Dear…, by Sinclair Park
See the Frank Gehry-designed UTS Business School in a whole new light. By illuminating its windows with colour-changing cove lights and wall grazers, Sinclair accents the crumpled-looking exposed brick form with jewel bright hues. Seen from the Goods Line, Frank Gehry’s unmistakable ‘paper bag’ aesthetic suddenly looks as enticing as a bag of mixed lollies.
Shard, by Lumos Creatives
This trio of light sculptures acts as a platform for the stories of Yolngu dancers Baykali Ganambarr, Wakara Gondarra and Watjarr (Marko) Garmu, with LED screen technology giving them a new way to express themselves that truly brings their language to fresh eyes and ears. Watch as the fire dances, the yidaki (traditional didgeridoo) sings and poetry is spoken.
Smash, by Creative Road Art Projects Pty
An arresting video projection of a pair of bejewelled stilettos stomping and splashing through puddles of silver paint. It’s a play on the Vivid Sydney 2022 theme of ‘Soul of the City’, as a ‘sole’ of a different kind can be seen as a catalyst for change.
Vivid Music at The Goods Line DJ Stage
A celebration of Sydney’s world-renowned DJ culture, The Goods Line DJ stage will see a diverse line-up of DJs from all eras and backgrounds creating the perfect soundtrack for The Goods Line Light Walk every night between 6pm-10.30pm.
The 2022 Vivid Light program features more than 50 installations and projection artworks, including work from 25 Sydney-based artists. Explore the Light Walk and immerse in the works from 62 light collaborators and 114 light artists from five countries.
Vivid Ideas Exchange at The University of Technology Sydney
Join some of the world’s greatest minds at the Vivid Ideas Exchange, with more than 60 events covering everything from racism and cults to death, climate change, space and drugs.This series of talks, seminars, screenings and workshops is designed to spark debate among  the creative community.
Vivid Ideas Up Late at The Powerhouse Museum
Celebrate who and what makes Sydney unique through talks, music, performance and art at Vivid Ideas Up Late. The Powerhouse Museum will host three events in the series:
Beautiful Freak in the Machine (2 June), Ballroom & the West Ball (9 June), and Queer Sydney (16 June).
Vivid Sydney will run for 23 nights from Friday 27 May to Saturday 18 June 2022. For more information go to www.vividsydney.com and get social using @vividsydney #vividsydney.

Wish you were here!