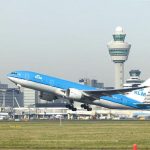 The two most effective ways of reducing CO2 emissions are fleet renewal and the use of sustainable aviation fuel (SAF). That is why the KLM flight to Edmonton and the KLM Cityhopper flight to Porto will be operated by the two most economical aircraft in their respective fleets, the Boeing 787-10 and Embraer 190, both of which will be powered by a fuel blend consisting of 39% SAF. In addition, a wide array of new weight-reduction measures were taken on board. World Business Class passengers were asked to choose their preferred meal in advance, for example, and AI modelling was used to predict inflight water requirements, ensuring that the precise volume was catered. Naturally, KLM has informed passengers that their flight has a special purpose, providing them with information on how they can travel more sustainable, for example by supporting the CO2ZERO compensation programme or by contributing to SAF.
Pilots worked with air traffic controllers to fly the most efficient route, avoiding the detours that flights often face. Loading was fully optimised to ensure the best centre of gravity, improving aerodynamics and generating fuel savings ranging from 1.5 to 2%. Cargo in the belly was stacked on lighter pallets and secured with lighter nets, and transport companies delivering cargo were asked to use vehicles powered by electricity or biodiesel. A total of more than 50 existing and new measures were taken aboard both flights, involving all KLM divisions as well as partners such as Edmonton Airport, Amsterdam Airport Schiphol, Air Traffic Control the Netherlands (LVNL) and General Electric. The impact of the latest measures will be evaluated to see whether they are worth implementing in the short term.
The Sustainable Flight Challenge was initiated by a group of enthusiastic KLM employees, who were inspired by the famous London-Melbourne Air Race of 1934, which aimed to expand global access to the world and connect people with one another. Long-distance flights are no longer a challenge to the air transport industry, but sustainability presents a new frontier. That is why the Sustainable Flight Challenge will focus on an everyday, commercial scheduled service.
The performance of the participating airlines will be externally evaluated by a panel of six judges, headed by former Dutch prime minister Jan Peter Balkenende. They will decide which airline has performed best in four categories: impact, innovation, scalability and cooperation. The results will be released at the end of June. The knowledge generated during the Sustainable Flight Challenge will be shared among the participating SkyTeam partners.

Flight Prices to Australia Soar Ahead of New Arrival Caps