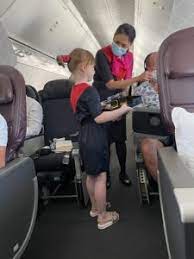 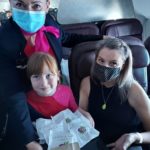 For five-year-old Savannah Schembri–Fitzgerald it’s a dream come true; to wear the designer uniform of her countries’ national airline, but also to help serve guests on a recent QF 101 fight from Sydney to Nadi. It wasn’t a directive or even sanctioned from above but a kindly feel-good gesture by the cabin crew fired up to be back at work.
“I live vicariously through Savannah” her mother Tina said as she was heading to the Hilton to celebrate a big birthday. “I also always wanted to be an air hostess.”
Senior purser Sharon Ashcroft was on hand to guide Savannah on the nuances of customer service. 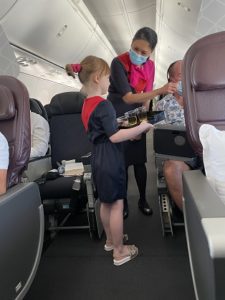 A popular young member of the crew, Savannah was excited and delighted and said she has wanted to be an air hostess for as long as she could remember and it was a real thrill to help Sharon serve the breakfast boxes and drinks. The sight of Savannah in her uniform brought cheers and clapping from delighted passengers and crew a positive story in a challenging time for both.
The 737 – 800 was only a quarter full and every passenger underwent a comprehensive five-point testing regime producing the appropriate papers for both the country of departure and destination prior to boarding. Passengers and crew were diligently wearing face masks for the most part of the flight. Although an early morning flight, some of the passengers more towards the front of the plane (J class) were enjoying the champers obviously sans masks.
Staff shortages at Sydney airport awarded a bonus upgrade for lounge pass holders. Business-class is closed and members are invited to the first class lounge, where white-jacketed and black tied servers offer an array of freshly prepared dishes and a bubbly if your constitution can handle it at six am. (Yeah I know the sun is over the yardarm at midday somewhere)
The bustle at Sydney Airport as frequent travellers know it is now very subdued with passengers tentative as to what their next move is before lining up to the board. 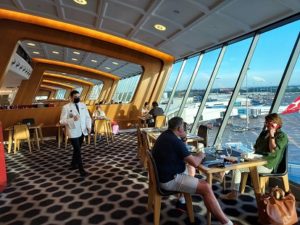 Both QF and Histopath (the resident quick result immunisation lab at the departure level at Sydney airport) suggest that travellers arrive four hours before their flight.  I did the test at the airport the day before I flew.  Straight in straight out and results emailed within two hours ($79)To get up at three in the morning would just about spoil the trip, especially if you were inclined to have a bubbly one at that time.
On check-in, at the Mercure in Nadi, one could be forgiven for thinking you were the only in-house guest, but after a day or two other patrons arrived. Although storms were predicted for most of my seven-day stay, the weather has been a mixture and there have been long sunny periods and the Tongan based tsunami has not impacted Fiji. The legendary Eds bar in Nadi has been taken over by Bar one and the equally well known Bounty restaurant is now TJ’s.
On the way to Sydney airport, it is sad for a travelling trooper to witness a great number of the Qantas fleet on the tarmac not going anywhere in a hurry.  Travelling now and in the future certainly ‘ain’t what it used to be.’
Written by John Savage

Stay, Play And Cruise In Queensland