Retro Motel Reimagined: The Isla To Open In Batemans Bay

Stylishly sentimental and luxuriously designed, The Isla, will open its doors in the coastal town of
Batemans Bay this summer, reviving the retro motel for the modern traveller.Designed by friends, for friends, the boutique motel is the passion project of a group of Canberra
professionals, at a time when travellers have emerged from lockdown seeking renewed pleasure in
exploring Australia’s nostalgic coastal towns. Understanding that travellers were looking for holidays rooted in mindfulness, accessible by road and appointed with luxurious touches, the group developed The Isla to be a nod to the sentimentality of retro holidays of the past, while offering modern design and amenities to appeal to a new generation of travellers.
The Isla features 18 guest rooms, including three guest suites; Poco which sits above the motel’s
refurbished pool and pool lounge; Vista which boasts the best view of the ocean, and Grande – the largest suite in the collection – complete with its own private pool. Each room will be fitted with contactless check-in so guests can access their room via their mobile phone, dreamy A.H Beard beds and coffee machines with Melbourne based ST ALi coffee pods.
In a nod to the motel’s 80s past, the old garage will be converted into a pool lounge that flows into a communal dining area surrounding a new pool, kissed with touches of retro cool. Instead of a minibar, guests will visit The Isla’s Cantina, a new concept where bespoke vending machines offer carefully curated and locally sourced artisan products, such as Dangerous Ales beer, cocktails from Poor Toms Gin and ST ALi espresso martinis.
Yanna Dascarolis, one of The Isla co-founders, says, “Many travellers are likely to have fond
memories of Batemans Bay from decades gone. The Isla was created to provide a stylish and exciting new environment from which to rediscover the area.”
In a town where community matters, The Isla proudly champions the local. Designed by award-winning architects THOSE, and a team of founders all based within an hour and a half of the popular holiday destination, The Isla plays up the sentimentality of Batemans Bay’s coastal surrounds. Accentuated with sunset hues and natural textures, the group added a touch of their own European roots, pairing the design with deep indigo blues to mimic the sea of the Spanish coastline.
Located just a stone’s throw away from the beach, the motel is surrounded by some of the world’s best oysters and picturesque walking tracks, making it the perfect setting for a relaxing holiday or chance to explore the New South Wales South Coast. After a tough two years of bushfires and lockdowns, The Isla’s founders are looking forward to being one of the first new tourism openings in the town, providing an opportunity for travellers to rediscover Batemans Bay once more.
Yanna Dascarolis says, “I have fond memories of holidays in Batemans Bay as a kid and since having
children on our own, we’ve fallen back in love with the beautiful untouched Australian beaches and warm community. It was important for us to keep in touch with the things we love about Batemans Bay and create something that was a fitting reflection of its charm.”
The Isla is set to open from February 2022. Room rates start from $200 and bookings are available online at www.theisla.com.au.

The Ritz-Carlton, Paradise Valley Slated to Open Q1 of 2021 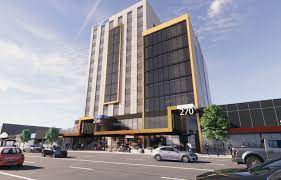