MSC Bellissima to stay in Saudi for the winter

MSC Cruises has announced that MSC Bellissima will extend her deployment in Saudi Arabia and the Red Sea for winter 2021/2022 season, following a “highly successful” inaugural summer season in the region.

According to a press release, the Bellissima will replace the Magnifica, which was previously scheduled to serve in the region this winter.

MSC said that the MSC Bellissima and her Red Sea itineraries have proven “very popular” since she first commenced sailing in July from Jeddah, Saudi Arabia and her continued deployment in the region will “further enrich the cruise experience for guests looking for the ultimate winter getaway.” 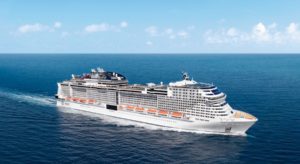 The itinerary for winter 21/22 is brand new for the cruise line and is “the first of its kind,” according to MSC. It offers international and local guests opportunities to discover Saudi Arabia, Egypt and Jordan by cruise ship – exploring their culture, history, tradition and enjoying their beaches.

From Oct. 30, 2021, the MSC Bellissima will offer seven-night cruises from Jeddah, calling at the ports of Ras Al Abyad, Aqaba for Petra in Jordan, Safaga for Luxor in Egypt and then Al Wajh and Yanbu, in Saudi Arabia.

The MSC Bellissima is one of the newest ships in the MSC Cruises fleet, first launched in 2019. Its facilities include the MSC Yacht Club, 12 dining venues and more than 20 lounges, a dedicated family deck area, two entertainment venues, an 80-meter-long LED Sky and more.

At the end of March 2022, the Bellissima will leave the region and reposition to Japan for her planned cruises out of Yokohama from April 2021.

Get ready to say ‘Alohaaah’ cruising in Hawai’i