Sad news today for the tourism industry, particularly in the Northern Territory, following the news that former Tourism Minister and chairman of the NT Tourist Commission, Eric Poole, died yesterday after a short illness.
I first met Eric on a working holiday to London at a popular watering hole for Australians, The Harrington Hotel on Gloucester Road Kensington. Years later, back in Adelaide and working at The News he rang me out of the blue from Hobart where he now worked for Hertz. He invited me to join him in the task of putting tourism in the NT on the world stage. It was no mean ask – probably the biggest challenge any tourism developer has faced in this country.
Despite its raw beauty the NT had little infrastructure, mostly dirt roads, poor air services – the list goes on. Uluru (Ayers Rock) was linked to Alice Springs by a mostly sandy road. The only accommodation was provided by demountables. Flights were restricted to small twin engine aircraft that could not operate in bad weather. The Travelodge in Darwin was the only hotel of any significance. The new Tourist Commission was established in around 1980 based in Alice Springs and Eric Poole and his team got to work selling the NT in Australia and in major overseas markets. This was a task that fell on the able shoulders of marketing manager Bob Doyle.
Offices had to be opened in each state and overseas. We attended important trade shows such as ITB and took a multi visual to America and Europe. With the full support of visionary Chief Minister Paul Everingham, who believed tourism was the future for the Territory, major advertising campaigns were launched. “Part of the Story of the Northern Territory” was being told in every corner of the land as new roads were built, new luxury hotels sprang up in Darwin, the airport at Alice was widened and a new strip built to support Yulara Resort near Uluru. Eric Pool’s legacy is now there for everyone to see – whether you are a backpacker or five star traveller. 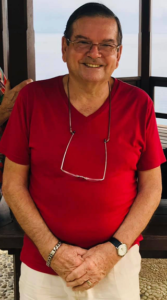 I headed to Darwin from Alice for a few years to work for Everingham before returning to The News. Eric meanwhile had moved into politics. He was the Country Liberal Party member for Araluen in the Northern Territory Legislative Assembly from 1986 to 2001. In 1989, his Ministerial portfolio included racing, gaming and tourism In 1995. Eric and his wife Libby retired to Queensland and then Bali. He will be greatly missed by all who were fortunate enough to know him.
As well as his wife, who he met in London back in the Harrington days, he leaves three children, Justin, Cameron and Victoria and many beloved grandchildren.
Written by Ian McIntosh