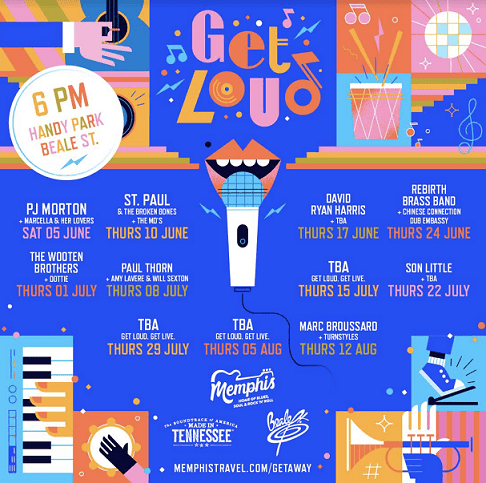 The GET LOUD! initiative helps ensure the Memphis destination delivers on the brand promise of live and local music for visitors. It also allows Memphis artists, musicians and event production personnel to get back to work all over our city. Memphis Tourism is partnering with existing live music events to designate them as additional Get Loud! activations throughout the year.

“Our goal is to create a unique opportunity to showcase Memphis music by putting silenced artists and musicians back to work, and delivering the core motivator that drives visitors to the Memphis destination, and that is music,” said Kevin Kane, President & CEO of Memphis Tourism. “This activation of the Beale Street entertainment district will not only create activity on the street, but in turn, increase overall hotel occupancy, fill our restaurants and venues and extend the length of stay.”

Made possible by Tennessee Department of Tourist Development funding, Memphis Tourism and the State worked together to develop strategic initiatives that will motivate travel and bring visitors back to a state known around the world for multiple genres of music.

“The Soundtrack of America is made in Tennessee, and we’re excited to see our stages and venues filled with fans again and artists back to doing what they love,” said Commissioner Mark Ezell, Tennessee Department of Tourist Development. “Tourism is vital to our state’s economy. Bringing music back to historic Beale Street every day is an important step in restoring our industry, as well as celebrating the identity and culture that make Memphis so special. We’re grateful to Memphis Tourism and all who helped bring the ‘Get Loud!’ summer concert series to life.”

The lineup for the GET LOUD! concert series features a variety of headline acts, many with connections to Memphis, along with local bands serving as opening acts in the concert series set for Beale Street’s W.C. Handy Park. The thoughtful approach to booking acts has produced a soulful lineup sure to entertain both visitors and locals who visit Beale Street for the concert series. Additional headline, and a full slate of opening acts, will be announced in the coming days. For the most up to date schedule as acts are announced, visit MemphisTravel.com.

“EVERY STORY IS A SONG” MARKETING CAMPAIGN: GET LOUD. GET LIVE. GET HERE

The live music showcase on Beale Street will work in tandem with, and be promoted via Memphis Tourism’s planned “Every Story is a Song” digital media campaign, targeting visitors in key drive markets within a 600-mile radius of the Home of the Blues, Soul & Rock ‘n’ Roll.  The soundtrack to the advertising campaign is a summer anthem penned and performed by Memphis artists at world famous Royal Studios, with Grammy award winning producer Boo

Mitchell as producer on the track. The GET LOUD! campaign anthem will be released via digital platforms in early Summer 2021.

“Our community is rooted in music, and the pandemic has made it hard for many of Memphis’ most creative voices to be heard over the last year, whether performing in venues or even creating new music in the studio,” said Boo Mitchell, a Grammy award winning record producer, musician, songwriter, audio engineer, and owner of the legendary Royal Studios in Memphis. “I have a tremendous amount of civic pride in Memphis. When I was approached about getting involved with this project to produce a song that was a musical invitation to visit our amazing city, I didn’t just say yes, I asked, when can we get started.”

Storytelling within the marketing campaign will be inclusive of all audiences through a variety of channels, emphasizing the current Memphis sound, while giving a nod to the legacy sound that made Memphis a world-famous music city.

“Through this music series and marketing campaign, Memphis Tourism is inviting all visitors, the uninitiated and the indoctrinated, to come be a part of our extended family, to share in our city’s stories and our songs,” said Regena Bearden, Chief Marketing Officer for Memphis Tourism. “We’ve all relished anecdotes from visitors who describe feeling a deep connection to the Memphis sound. It touches your soul, creating a familial feeling, echoing who we are as a city and a destination. When you visit, you become a part of our extended musical family, and you may want to dance too.”

Anywhere you go in Memphis, there’s a story waiting to be told, a song that connects to your heart and stays with your soul. Visitors can make a long weekend of it and celebrate that spirit with live music citywide every day this summer, kicking off with the GET LOUD free concert series in Handy Park. With live music, legendary attractions and Beale Street – plus food that’ll feed your soul – planning a visit to Memphis for an unforgettable music experience is effortless with resources available at MemphisTravel.com, log on today and feel the Memphis beat.

The U.S. Lifts the Pandemic Travel Ban and Opens the Doors to International Visitors