Parisian Cabaret Great To Shine At The Star Gold Coast 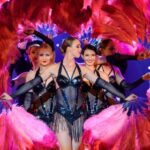 It’s absolutely the New Year’s Eve experience you need – for one magical night only the burlesque extravaganza Cabaret de Paris will take over The Star Gold Coast, to farewell 2020 and welcome 2021.

This lavish French cabaret show features breath-taking dancers, beguiling music and an array of international guest artists, including aerialists, pole dancers, illusionists and of course, the famous French cancan dancers in spectacular costumes; a nod to the elegance and glamour of Paris.

Starring in Cabaret de Paris is none other than the legendary showgirl herself, Marissa Burgess, the longest-serving performer in the Moulin Rouge’s 120-year history.

Australian-born and trained Marissa has a string of accolades to her name and became the toast of Paris and the subject of many French TV talk shows and a US documentary.

Joining Marissa on stage include the crème de la crème of showgirls from around the world; 14 dancers who have graced the stages of France’s most famous cabaret revues. The show features over quarter of a million dollars’ worth of lavish costumes crafted in traditional Parisian style, with feathers, sequins, rhinestones and jewels (some covering barely anything). Note this is a topless burlesque revue; some aspects of the show may offend so viewer discretion is advised.

Cabaret de Paris is choreographed by Todd Patrick, one of Australia’s dance leaders who began his formidable career with Disney, before working for Versace, Dior, Issey Miyaki, Gucci and Chanel, across Europe and Asia. As a dancer he worked internationally, one of the highlights being the principal in The Lido in Paris. 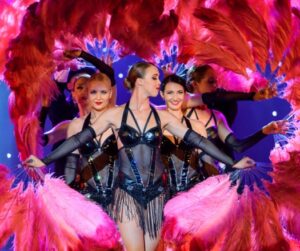 At 16 years, Marissa made her professional debut at Launceston Casino and Wrest Point Casinos in “C’est si Bon”. Immediately after this a call from Paris came and Marissa headed to France to be part of the prestigious Bal du Moulin Rouge at the age of 17.

Meanwhile, at the Moulin Rouge, Marissa had swiftly risen to star status and had the privilege of performing alongside such greats as: Ella Fitgerald, Ray Charles, Mikhail Baryshikov, Sir Elton John, Svion Glover, Donald O’Connor, Charles Aznavour, Sacha Distel, Jerry Lewis and many more. A royal performance before the Prince and Princess of Wales at the Savoy Hotel, London, was also a career highlight.

Her celebrity status was heightened during the run of Baz Luhrmann’s “Moulin Rouge” film, when art was compared to life. During her 18 years involvement, she stared in three multi-million-dollar revues; “Femmes, Femmes Femmes”, “Formidable” and “Feerie”, Earning the title of longest serving star in the Moulin Rouge’s 120 year history. The Guinness Book of Records recognized this achievement.

Marissa last appeared on Jupiter’s stage in 2002 with the production show Rhythm of the Night, 10 years later she is bringing back elegance and the glamour of Paris onto the stage of Jupiter’s Theatre.

From the capital to the coast with parkrun