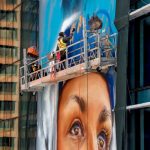 Perth’s hottest new hotel, The Adnate, is about to reach a sky-high milestone in its development with its 25-storey ‘Mega Mural’ nearing completion.

The imposing mural by the hotel’s namesake artist, Australian big-wall painter Matt Adnate, will be one of the world’s tallest murals and will bring a striking new artistic feature to Perth’s CBD.

His Mega Mural at The Adnate far eclipses his work in Collingwood, which became the tallest mural in the Southern Hemisphere when it was unveiled. In fact, The Adnate’s new record-holding mural will stand just seven storeys shorter than the world’s tallest mural in Toronto, which measures 32 storeys.

Beyond earning Matt a place in the record books, the real purpose of this sky-high external mural is to highlight Perth’s cultural history and community.

The Mega Mural, which is on track to be completed next week and took Matt one month to finish, will be his biggest yet and will feature three large-scale portraits – including the face of a Noongar man, an Indian woman and a Mediterranean woman – all created solely with spray paint.

“I’m taking different faces to create a story that runs the whole way down the mural,” Matt said. “Each face tells a different history and background. It will depict the past through the cultural representation in the subject’s dressing elements, the present with contemporary faces, and the future as the subjects are the youth of today.”

Matt will also be collaborating with a local Indigenous artist on a 50-metre-long exterior laneway mural and, inside the hotel, is contributing a mural above the hotel’s main staircase.

Two original canvases and up to 650 reproductions of 30 of Matt’s most recognised works from around the world will adorn the walls and halls of the hotel development by George Atzemis. 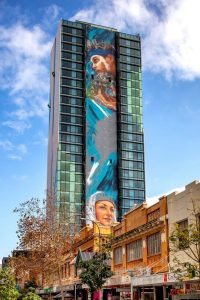 In addition to this vast array of Matt’s art, the hotel will add 250 guest rooms to Perth’s burgeoning hotel supply, a gymnasium, function room, centrepiece pool area on its first floor, and a chic new state-first food and beverage destination, serving Mediterranean cuisine and the city’s best cocktails.

Scheduled to open its doors to guests in October, The Adnate will be the first Art Series hotel dedicated to street art and heralds the arrival of the Art Series brand in Western Australia – Australia’s only boutique hotel brand creating art-inspired experiences for guests.

“You won’t need to book a stay to enjoy Matt’s exterior murals,” Mr McGrath said. “His soaring Mega Mural on the entire east-facing side of the hotel faces the city for all to enjoy.”

Signature art experiences at The Adnate will include the brand’s famous art tours, in-room art channels and art libraries. Branded courtesy cars and Lekker bicycles will be available to explore all that Perth has to offer and further afield.

To celebrate the near completion of Matt’s Mega Mural, Art Series has released an opening special rate for The Adnate, which is from $179* per night. To book, visit www.artserieshotels.com.au/adnate

Once open, The Adnate will be Accor’s ninth Art Series hotel in Australia, complementing the brand’s existing hotel portfolio – Melbourne hotels The Olsen, South Yarra; The Blackman, St Kilda Road; The Cullen, Prahan; The Larwill, Parkville; The Chen, Box Hill, along with The Watson in Walkerville, South Australia and The Johnson and The Fantauzzo in Brisbane, Queensland.