Plastic is one of the materials most commonly found polluting the environment and minute traces of it have been found in everything from our drinking water to the seafood that we eat. A killer of both marine and terrestrial creatures, plastic is a man-made blight on the environment. Luxury travel company andBeyond has joined the legions of individuals, companies and NGOs that are striving to make a difference by limiting their use of the material. 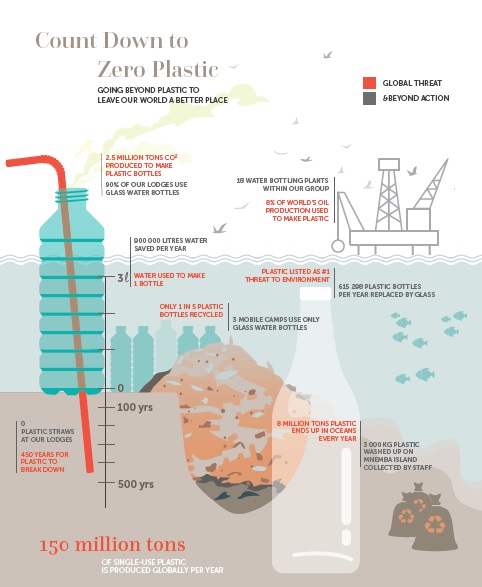 Water bottling plants at each lodge and some central offices reduce the usage of plastic by providing purified water in recyclable glass bottles. In 2015, andBeyond stated its objective for 100% of its lodges to have their own glass bottling plants and to reduce the number of plastic bottles used in the group by 90% by 2020. Four years later, the company is well on its way to meeting that objective, with 90% of its lodges using glass water bottles, saving 615 298 plastic water bottles per year.

Plastic straws have also been removed from andBeyond’s island lodges and replaced by paper or metal alternatives, a project that delved deep into the detail at each lodge. Guest amenities such as shampoo and shower gel also come packaged in refillable glass bottles at all lodges to eliminate the use of plastic.

These successes have not come without their challenges and, due to the remote nature of their operations, the group is often faced with decisions where there is no clear and easy solution. For example, on their East African circuit, they have been forced to choose between recycling plastic bottles and importing glass ones to eradicate the use of plastic. andBeyond’s mobile tented camps in Botswana rely on the company’s water purifying plants in Maun and Kasane to provide them with bottled water in glass containers. However, logistics and importation restrictions still have to be resolved in order to install water bottling plants at the company’s two mobile camps in Tanzania’s Serengeti National Park. With 90% of all lodges now only using glass bottles for water, the challenge is on to find innovative ways of increasing this number even further.

Not content with amending its own policies, andBeyond has also sought to encourage their suppliers to look for more environmentally friendly alternatives. For example, in Botswana air charter company Mack Air has recently introduced the “cool freight” solution, which utilised specially designed containers to keep perishable items fresh while being flown into camp. The initiative has significantly reduced the waste of single use packaging, eliminating the use of approximately 150 cardboard boxes per lodge each month. Similar substitutions are being investigated elsewhere on andBeyond’s lodge circuit, with lodges making every attempt to replace single-use packaging with more durable alternatives.

The extent of plastic pollution is more easily visible at andBeyond’s island lodges than anywhere else. At andBeyond Mnemba Island, staff have introduced an innovative initiative to remove trash from the ocean and keep the island clean. Each morning, a different staff member is nominated to take a beach basket and do a beach clean-up throughout the say. Frighteningly, the waste collected on this tiny island off the coast of Zanzibar during 2018 added up to a total of 3 000 kg (6 613 lb). andBeyond Benguerra Island also see rubbish washed up on shore, frequently deposited by rivers and streams that run into the ocean. A weekly beach clean-up is conducted around the lodge and once a month the team carries out a larger operation that covers most of the island’s beaches.

andBeyond’s plastic reduction initiative is not limited to its operations in Africa and its first South America lodge, andBeyond Vira Vira in Chile’s Lake District, also received its own water bottling plant prior to reopening under the andBeyond brand. Since September 2018, the lodge has been serving still and sparking water in recycled glass bottles and has even introduced reusable metal straws with its cocktails. Other sustainability efforts at andBeyond Vira Vira include the full recycling of grey water, the use of sustainable wood pellets for heating and the reducing of the lodge’s carbon footprint through only purchasing local goods.

andBeyond has also sought to make guests more aware of the choices that they make as consumers, introducing the Oceans Without Borders pledge in April 2018. Designed to encourage guests to make more environmentally friendly choices, the pledge was launched at all andBeyond lodges, as well as on the company’s website and social media channels. So seriously does the company take it that it also included the pledge on indemnity forms at its three island properties and launched a set departure itinerary that highlights the impact of our daily choices on the health of the world’s oceans.

IAPCO 50th Anniversary Legacy – Not Just a Drop in the Ocean

Bannikin Trend Report: 2020 is the Year Travel Brands Own Their Role in Climate Change