Rock out with Frontier Airlines! Enter for a Chance to Win a Trip to Phoenix to Join Frontier CEO Barry Biffle at a Heavy Metal / Rock Concert 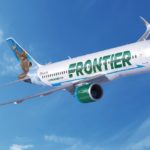 Ultra-low fare carrier Frontier Airlines announces the Rock with Frontier Sweepstakes! Enter for a chance to win a trip to Phoenix to join Frontier Airlines President and CEO Barry Biffle for a rock star concert experience on August 25, 2022.

“Frontier is all about making it easy and affordable to bring family and friends together for some fun and enjoyment – and what’s more fun than a rock concert?!” said Barry Biffle, president and CEO of Frontier Airlines. “Get ready to pack your bags and join me in Arizona for an epic concert lineup featuring true legends of rock and heavy metal.”

Two winners will receive complimentary roundtrip airfare for four to Phoenix, one-night hotel accommodations, car rental, and entry to the concert on August 25. The concert will be held at State Farm Stadium in Glendale, Arizona.

Frontier Airlines is committed to “Low Fares Done Right.” Headquartered in Denver, Colorado, the company operates more than 110 A320 family aircraft and has the largest A320neo family fleet in the U.S. The use of these aircraft, Frontier’s seating configuration, weight-saving tactics and baggage process have all contributed to Frontier’s continued ability to be the most fuel-efficient of all major U.S. carriers when measured by available seat miles (ASMs) per fuel gallon consumed.

Singapore Airlines Gives Melbourne A Taste Of Wellington Through VR