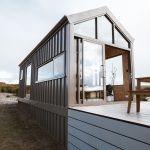 An innovative South Australian eco-tourism company is changing the face of accommodation with the launch of a second off-grid luxury tiny cabin boasting world-class views.

The immersive tiny cabin, named Maldhi, is nestled on the edge of a picturesque gully overlooking the coastal cliffs of Sleaford Bay, on the south coast of the Eyre Peninsula. It features world-class views across Sleaford Bay to the vast expanse of pure white sandhills separating Port Lincoln National Park from the rugged southern ocean. It’s a truly magical and private location, surrounded by pristine native vegetation with panoramic views, EYRE.WAY Director Amanda Hogg said.

Not only are kangaroos often spotted hopping across the landscape, but in winter Southern Right whales who call the shallow waters home are just a stone’s throw away, enjoying the pristine and relatively calm waters of Sleaford Bay.EYRE.WAY founders Amanda and Tim Hogg’s mission is to provide environmentally sustainable luxury and private accommodation at Eyre Peninsulas’ best – and most secret – locations, where visitors can be immersed in nature completely on their own. 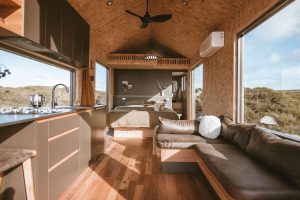 The launch of Maldhi, which means night sky in Barngarla, follows the stunning success of Yambara, a tiny cabin built by Amanda and Tim and launched in November last year. Located on a secluded stretch of coast near Port Lincoln, Yambara has been nearly sold out since it opened with an incredible 95 per cent occupancy rate. The success and love for Yambara have just blown us away, Amanda said.

We have had guests from all over Australia who want to escape their busy lives and just be completely immersed in nature come and stay, so we decided to build a second tiny cabin. Amanda said the concept of being offline was a real luxury as people could escape emails, phone calls, traffic, social media and people. Making a minimal contribution to climate change while enjoying a break is such a positive for our guests, she said.

It’s a special feeling knowing the sun is powering your accommodation, and we hope it inspires guests to live more sustainably when their holiday ends. Malhi is completely off-the-grid, featuring a solar-powered battery system powered purely by the sun. Rainwater is captured in Port Lincoln and taken to the tiny cabin. 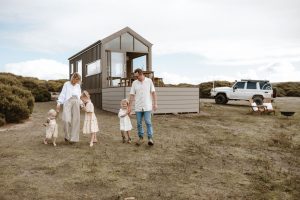 Grey water is taken off-site and removed sustainably. Our architect designed the tiny abode to make the most of natures warming and cooling characteristics, and we used environmentally sustainable materials throughout the construction process, Amanda added. Some key features of Maldhi include A short walk that takes visitors to an untouched coastal shoreline featuring rugged, vast natural beauty, while a cliff-top walk reveals the full panorama of the Southern Ocean.

The windows in the tiny cabin are so large you don’t need to go outside to enjoy the natural beauty you can enjoy it all from your luxury king-sized bed.

Maldhi is available for $450 per night and sleeps four people, www.eyreway.com.

Qantas gives country and outback a break from fees