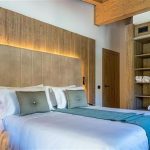 The Grand Hotel Cervino is a five-star hotel with an extraordinary continuity between the interior and exterior spaces: “This concept – architect Mariapia Bettiol di Aosta says – was one of the starting points of the project, fundamental, which we thought about from the beginning”.

The architect worked on a particular area, narrow and long, with a constraint regarding the body of the building and proposed to realize a structure that would take advantage of the view of nature both in front and behind with the impressive and spectacular presence of Matterhorn. The objective was to create simple volumes from a large starting volume that was split into smaller parts to recreate the idea of a mountain village.

Indeed, this structure is reminiscent of the neighboring village, a very traditional complex whose original forms it takes, while gracefully modernizing it. The three bodies into which the original structure is divided rest on the basement foundation of what was a large garage that goes right into the mountain, causing nature to envelop the three volumes that insist on the stone foundation.

Concreta’s collaboration was expressed in the interior part through a strong combination of architecture, client (ViCO enterprise and Mythos Group) and project, making a successful synthesis between the objectives of the different stakeholders.

The sixty rooms are compact in size, with a strong rationalization of furnishings that allow them to fully experience the required functionality, and in this, Concreta provided valuable cues to achieve this goal. In the furnishing of the rooms, wood was played with in combination with stone materials. “The presence of wood, confirms architect Bettiol, in the mountains is essential to create and preserve an impression of warmth with a traditional and modern mountain slant.”

In this project for the Grand Hotel Cervino, the Valtellina-based contractor Concreta has once again expressed its ability to dialogue and interact with the facilities and the territory, to make the most appropriate choices in both furnishing solutions and materials, as well as to rely on the preparation and reliability of its teams, leading to an optimal result, even under challenging timelines, through competent and proactive collaboration with the other parties involved in the work.