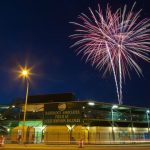 With its 23 miles of pristine world-famous beaches, Daytona Beach is a great place to visit any time of the year, but the destination will shine especially bright on the upcoming July 4th holiday. From an inaugural two-day soccer and music festival held at Daytona International Speedway to concerts, baseball, a veterans parade and fireworks, visitors will find just what they are looking for to celebrate the Independence Day holiday weekend.

For the first time in history, a professional soccer field, at a cost of more than $1 million, will be built in the infield at Daytona International Speedway to host Daytona SoccerFest, which will feature a series of matches on July 2-3:

Visitors will discover plenty of options for even more fireworks shows in the Daytona Beach Area. The Daytona Tortugas, Single-A affiliate of the Cincinnati Reds of Major League Baseball, will face off against the St. Lucie Mets in a Florida State League game on Monday, July 4 with post-game fireworks scheduled after the final out.

The Daytona Beach Bandshell, the scenic amphitheater located on the north end of the Boardwalk amusement area overlooking the Atlantic Ocean, will host four concerts between July 1-4:

Fireworks are scheduled on July 2 & 4 after the concerts at 9:45 p.m. General admission is free, guests may be bring their own chair. VIP reserved tickets are $10 each night.

Both the City of Ormond Beach and the City of Port Orange will provide fireworks with their July 4th celebrations. City Center Park in Port Orange will host a 4th of July Spectacular between 5:30 p.m. – 9 p.m. with the live band Chrome 57′, food trucks, a corn hole tournament and kids’ zone. Fireworks will be set off at 9 p.m.

City of Ormond Beach will host an Independence Day Celebration between 8 p.m. – 9:30 p.m. with music, food and fireworks, which will begin at 9 p.m.

The second annual Fourth of July Veterans Parade will be staged on Main Street at 10 a.m. and pay tribute to veterans and first responders.  Organized by the Marine Corps League Daytona, the parade’s lineup will feature nearly 30 local military organizations, as well as combat veterans, and the city’s police and fire departments.

To view all the events happening in the Daytona Beach Area on July 4th Weekend, visit www.daytonabeach.com

America’s First Resort Destination Launches New Brand Campaign: The Original, The One, The Only, The Palm Beaches