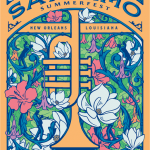 French Quarter Festivals, Inc. (FQFI), producer of Satchmo SummerFest presented by Chevron, is proud to announce the 2022 live music, speaker series and culinary lineup for the festival’s annual return on August 6 & 7 at the New Orleans Jazz Museum at the Old U.S. Mint. The premier American festival dedicated to the life, legacy, and music of New Orleans’ native son, Louis “Satchmo” Armstrong, brings two days of live entertainment, food, and fun that is certain to keep fans on their feet and dancing to the beat.

Fest attendees can once again pre-purchase tickets online beginning Wednesday, June 22, 2022. Tickets can be purchased in advance for $7 or onsite for $10 per day (children 12 and under are free). Admission also provides access to the Jazz Museum’s collection and exhibitions, plus the Satchmo Legacy Stage in Memory of Joni Berry featuring discussions and presentations by world-renowned Armstrong scholars. Fans are encouraged to register here in advance to secure their spot and avoid lines.
20 Jazz, Brass, Swing, Funk, and Fusion Acts to Perform,
Along with Satchmo Scholars

On the Satchmo Legacy Stage in Memory of Joni Berry, scholars and historians will present on a wide range of topics surrounding all things Louis Armstrong from 1-5pm each day. Festival favorite and GRAMMY® Award winner Ricky Riccardi, Director of Research Collections for the Louis Armstrong House Museum and Archives and the author of What a Wonderful World, will return with a host of all-star scholars. Enthusiasts and novices can dive deep into the life and legacy of Armstrong and learn of his humble beginnings and tenacity with presentations such as Peter Davis, the Music Master of the Great Louis Armstrong, with Dr. Robert S. Mikel a native New Orleanian and decorated educator with research works and interest in multiple fields of study including early New Orleans Jazz, as well as a very special interview with Jewel Brown, who was a female vocalist with Armstrong’s All-Stars from 1961-1968.

In addition to music, the 2022 Satchmo SummerFest presented by Chevron will feature unforgettable New Orleans cuisine from some of the city’s most loved restaurants and up-and-coming chefs. Attendees can indulge a little more with gluten-free and vegetarian options from Beaucoup Eats with the Vegan Fish Po-Boy, Jerk Chicken Pasta and Red Beans & Rice (Satchmo’s Favorite dish) with a side of Catfish and 14 Parishes, who returns with Jerk Chicken or Pork, Plantains and Festival (Jamaican Fried Dough!). Ditto’s Did Dat also joins the Fest with Fried Crawfish, Grilled Chicken, and Shrimp Tacos. Enjoy delicious eats from like the Cajun Seafood Rolls, Fried Green Tomatoes with Shrimp Remoulade and Fried Ribs from Café Dauphine, a fusion of flavors from Theaudric’s Real Clever Cuisine with the Shrimp Cavatappi Fatooush, Brussel Voorheese with Fig Truffle Glaze and Creme Bru’leches Breadpudding and scrumptious bites from Praline Connection including Chicken Livers, Fried Okra and more. Festers looking to cool down can look forward to Plum Street Snoballs with their traditional flavors and add-on options to personalize your sweet treat, or take a healthier approach with their sugar-free flavors.

This year’s cocktail menu includes favorites such as the Jack Daniel’s Lynchburg Lemonade, El Jimador Tequila Margarita and Bubly Sea Breeze (Bubly, Cranberry, Finlandia Vodka + Lime). Fans can relax with a seat and some shade at the Sonoma-Cutrer Rosé Café and our beer lovers will find many options from Abita Beer including, for the first time at Fest, Hard Sweet Tea chilled and ready. Non-alcoholic options will also be available including Pepsi, Bubly and Gatorade to keep hydrated. Click here to see the complete menus.

“In celebration of Satchmo Summerfest, we wanted this year’s poster to be a blend of New Orleans icons: bright colors, unique architectural elements, beautiful flowers, and of course, the instrument most closely associated with the city’s most revered musician, Louis Armstrong,” said Scott Hodgin, Owner & Creative Director of TILT

The official Festival poster can be pre-purchased now with shipping beginning mid-July. Posters will also be available at the official merchandise booth during Fest.
There’s Even More to Enjoy at Our Fest

The 22nd annual event returns with its favorite traditions and added fun for the whole family:

Satchmo Soundoff: Music fans of all ages can attend a special performance by some of the city’s youngest and most talented musicians. The Roots of Music presented by Fidelity Bank will kick off this year’s festival Saturday at 11:30am on Esplanade Ave., right outside of the Museum gates.

Satchmo SummerFest Second-Line Parade: The Treme Brass Band will lead attendees out of Sunday mass at St. Augustine Church at 11:15am in the Treme neighborhood and through the French Quarter for a Second-Line parade to the New Orleans Jazz Museum.

A New Tradition, With Major Impact

Festival organizers continue their partnership with the Barataria-Terrebonne National Estuary Program (BTNEP) for the second year at Satchmo SummerFest after a successful first year at French Quarter Fest with the Geauxing Green Initiative. The program will focus on marine debris prevention by allowing only reusable, recyclable, and compostable food and drink products at the festival. In addition, attendees will be greeted by Green Team staff, who will be on hand throughout the festival grounds to guide the public in the use of recycling and composting stations. Accompanying marketing materials focused on marine debris prevention will be available on site. The partnership supports FQFI’s goal of being a leader in sustainable festival production in the Gulf South.

Thank you Sponsors and Community Partners:

French Quarter Festivals, Inc. is proud of its 39-year history of providing high-quality community events that are accessible to all. The organization relies heavily on the contributions of sponsors and partners as well as beverage and merchandise sales to support the festival. Festival organizers welcome the return of Chevron as Presenting Sponsor of Satchmo SummerFest. “Satchmo SummerFest is a celebration of the music, life and legacy of Louis Armstrong and is part of Chevron’s commitment to the local community,” said Leah Brown, Public Affairs Manager for Chevron’s Gulf of Mexico Business Unit. “His determination, talent, charisma, and charity broke down barriers in the Crescent City, across the country, and around the world. This event honors New Orleans’ favorite son, while also stimulating economic growth and fueling the social vitality of southeast Louisiana. Chevron is proud to be a part of it.”