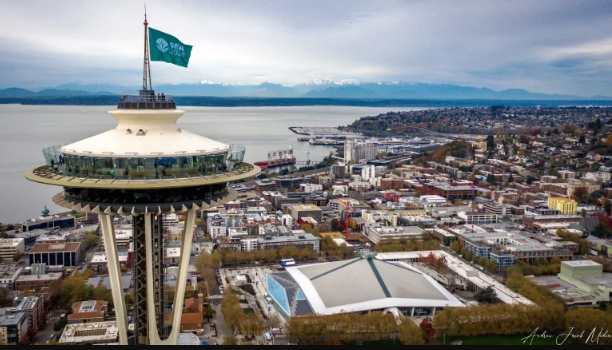 Seattle’s hospitality industry is rejoicing as the city wins its bid to host the FIFA World Cup 2026. The announcement was made earlier this week by FIFA leaders during a live, international broadcast. Seattle is one of 16 cities across North America selected by FIFA to host matches for the men’s tournament in summer 2026. The historic announcement is the culmination of a bid over a decade in the making, driven by public and private sector leaders across Washington state.

“Our city has been preparing for this moment for over a decade, laying the groundwork with previous FIFA bids,” said Beth Knox, President & CEO of the Seattle Sports Commission and SEA 2026 Bid Committee Co-Chair. “Today’s announcement marks the end of a five-year, labour of love journey in communicating to FIFA what we knew from the very beginning: we are ready to host the FIFA World Cup 2026. Seattle brings a passionate soccer fan base, world-class facilities and a community dedicated to creating memorable experiences for fans. Just as important as welcoming the world to the Emerald City, SEA 2026 will leave a meaningful and lasting legacy by increasing access to soccer pitches for kids across the state, creating solutions that address social and environmental justice issues, and contributing to the economic vitality of our unique and diverse neighbourhoods.”

The United Bid Committee estimates that 2026 host cities will collectively generate more than $5 billion in short-term economic activity, with an estimated net gain of $90-480 million per city after factoring in estimated public costs. A total of 40,000 jobs will be supported throughout North America’s 16 host sites – in Seattle, that will mean a significant amount of new jobs in support of the events.

“Today’s announcement represents one of the most significant moments in Seattle’s proud history as we cement our spot as an all-time great international sports destination,” said Tammy Blount-Canavan, President & CEO of Visit Seattle. “As we celebrate the prosperity and recognition these matches will bring to our region, we must also recognize the tremendous efforts by the SEA 2026 team, Seattle Sounders FC, the Seattle Sports Commission, the City of Seattle and of course, our Visit Seattle community, to make this possible. Our sales team and hotel partners are leading an extraordinary feat to secure over 10,000 hotel rooms on peak nights across the region – which ultimately had a pivotal role in our selection as one of the host cities.”

The FIFA World Cup 2026 will be a 48-team tournament hosted by three nations – both firsts for a FIFA World Cup. An announcement on the number of matches, and the rounds Seattle will host, is expected in June 2023. The 1994 FIFA World Cup (the last to be played in the U.S.) was the most financially successful in the tournament’s history – breaking World Cup average attendance records with nearly 69,000 spectators per game, a mark that still stands today. Visit Seattle anticipates all hotels within a two-hour drive of Seattle will be fully utilized.

“We’re thrilled FIFA recognized the infrastructure Seattle has in place to hold global events like the World Cup,” said Kelly Saling, Senior Vice President and Chief Sales Officer for Visit Seattle. “Seattle is the perfect setting to host World Cup matches. Our region is compact and efficient, providing an extraordinarily beautiful landscape complete with passionate soccer fans. We get to share our outstanding venues and hotels, the mix of unique culture, food and music; and of course, an authentic Pacific Northwest atmosphere.”

Seattle’s hospitality industry united to collectively meet the requirement of committing thousands of hotel rooms for future peak nights during the summer of 2026 for a match schedule that is not yet known. These commitments required a great deal of cooperation from all regional hotels.

“Being named host city is a testament to the strength and resiliency of Seattle’s hospitality industry,” said Tom Wolf, General Manager for Hyatt Regency Seattle. “Our community rallied together to ensure commitment to hosting one of the most significant international sporting events and certainly the largest in Seattle’s history. For hotels, this brings an unparalleled opportunity to introduce Seattle to global travellers. At Hyatt, we’re excited about how the format of the World Cup will allow for travellers to get the hyperlocal experiences that are true to Seattle.”

Visit Seattle and the Seattle Sports Commission also celebrate the significance of this news for local sports fans, with today’s announcement carrying on a storied soccer tradition in Seattle and the greater Pacific Northwest. Seattle is regarded as one of the top U.S. soccer cities. The esteemed Seattle Sounders FC Club regularly has some of the highest attendance in MLS, and recently recorded the largest standalone crowd in CONCACAF Champions League history, with 68,741 fans. The OL Reign is a founding member of the National Women’s Soccer League (NWSL) and shares the Sounders FC home pitch at Lumen Field. Youth and amateur soccer programs abound with 93,000 kids and teens participating in Washington Youth Soccer, a strong homegrown player pipeline, and frequent hosting duties for elite national tournaments for boys and girls soccer.

Wild election over, US travel industry reacts to Biden’s win