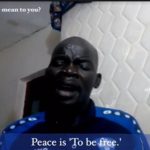 The international peace organization Heavenly Culture, World Peace, Restoration of Light (HWPL) held an online peace vision conference on 7th May.
They discussed the status and measures of institutionalizing peace to be pursued by each country and shared examples of activities for spreading the culture of peace with leaders from various fields in Asia and Africa.
The event was held as a deliberative forum that reacts to lay the basis for peace as an institution to promote universal values, norms, and culture of humanity and presented at ‘HWPL’s 6th Annual Commemoration of the Declaration of Peace and Cessation of War (DPCW)’ on 14 March 2022.
126 civil society leaders, religious leaders, educators, youths, and journalists from 13 countries, including Sudan, Cameroon, Rwanda, Myanmar, East Timor, and Thailand, participated in the event. Participants were divided into groups and discussed four different agendas for ▲ the Workshop on the Darfur area’s peacebuilding ▲ Institutionalization of Religious Peace ▲Institutionalization of peace education and ▲ youth activities to realize peace.

Mr. Zekra Suliman Aldoom Yousif, Senior Health Project Officer in Catholic Relief Services(CRS) of Sudan said, “The Darfur conflict and war, which began in 2003, left psychological trauma to the Darfur community, making it difficult to forgive, respect, and coexist with each other. However, through access to the HWPL Peace Curriculum, we can spread peace in our community.”
Mr. Khin Maung Than, Advocate lawyer, Independent Lawyer Association of Myanmar said, “There are more than 100 ethnic groups and religions in Myanmar, and sometimes there religious problems often arise. Myanmar law also states that religion and politics should be separated, and I think it is connected with HWPL’s DPCW Article 8 Freedom of religion. The institutionalization of religious peace could make Myanmar more peaceful.
Also, About the institutionalization of peace education, Monique Uwingabiye, the teacher of Groupe Scolaire Marie Reine Rwaza shared, “We had a small group meeting on the topic of ‘Institutionalization of Peace Education.’ If we have the institutionalization of Peace Education at the national level, the positive impact will be to live in harmony for all Rwandanians. And I personally think it would be better to begin at the Primary level.”
Daniel Santos do Carmo, Former Director of FONGTIL of Timor-Leste stressed the network of youth for peace in the community. He said, “In order to institutionalize peace in Timor-Leste, it is important for young people to have a network and collaborate with civil society, schools, religious groups, and governments.”
In the second part, detailed provisions of the DPCW, which was declared in 2016, were cited as international documents that emphasized the call for solidarity to promote world peace, education that encourages mutual respect, achievement of UN SDGs, and guarantee freedom of the press.
Article 10 of DPCW “Spreading the Culture of Peace” was introduced, emphasizing the need for various peace activities to recognize the value of peace to global citizens and promote public awareness in each country to preserve sustainable peace. Major examples of related practices by country were ▲ Peace Monument in Mindanao, Philippines ▲ Peace Monument in the Kingdom of Bapokeng ▲ Peace Mural Painting ▲ Peace Flash Mob in Australia.
HWPL staff who organized the event said, “HWPL’s 9th Annual Commemoration of the Declaration of World Peace will provide current cases on realizing the collective will and institutionalizing peace in different parts of the globe on May 25th.”
(https://www.youtube.com/watch?v=LEAi1KaLg4Q)