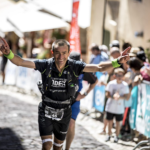 The world’s leading trail running circuit, UTMB® World Series, heads to France this weekend as over 2,000 runners across a variety of abilities prepare to take on one of the most famous pilgrimage trails in the world as part of Trail du Saint-Jacques by UTMB®.
An event that is well-known for its inclusivity featuring four course distances from 17km to 123km, elite and passionate amateur runners alike will get to experience the beauty of the Haute-Loire region at its finest, from the wild and unspoiled countryside threaded by rivers and streams to the stunning volcanic landscapes of the Massif Central Mountain ranges and its panoramic views.
In addition to the exceptional setting, the course also takes runners on a cultural and historical journey through time as they complete sections of the Camino de Santiago. Completing it in reverse, runners will get to experience this most famous of pilgrimage routes as they embark on their own trail running quest.
Patrick Dufour, Race Director, explained the impact joining the UTMB World Series has had on the race and the region. “ Being part of a circuit of some 25 races in the world is a real recognition for the event. It is also a great showcase for the region. You only have to look on the search engines. The name of Le Puy-en-Velay and Saint-Jacques are regularly associated with all the events linked to the UTMB World Series circuit. And, the Grand Trail du Saint-Jacques has kept its original spirit. This year, we can see that there is already a craze with an increase in participation, particularly in events such as the ultra or the 72km.”
The event begins on the evening of Friday (June 10th) and kicks off with the longest test, the 123-km route featuring a challenging 5,150m of elevation gain. As first light hits on Saturday morning, runners will experience an extra boost as sunrise further showcases the stunning surroundings. For those athletes opting for the shorter but no less spectacular distances, Saturday morning will mark the start of their race as they head off on their own adventure and collectively head towards the ultimate finish line.
Having taken in the stunning rural French beauty of the region, the final stages of the race will culminate at the cobbled narrow streets of the Old Town at Puy-en-Velay as runners complete one last uphill section before passing under the finish line arches in front of the dominating and unforgettable UNESCO World Heritage Site of the Cathedral Notre-Dame du Puy.
An understandably popular race amongst French athletes, the Trail du Saint-Jacques by UTMB has also caught the attention of international athletes from around the world with 33 nations represented on the startline.
Brothers Aubin and Ugo Ferrari of France are the top ranked male competitors in the 123-kilometre race based on their UTMB Index and will no doubt be on the hunt for a podium spot and hoping to perform well on home soil. Ugo commented: “On a course like this, I am looking to earn some Running Stones and to try and qualify for the UTMB 2023. It would be a big disappointment not to be able to finish on the podium.”
“This area is also my coaches’ childhood town and having visited once, I saw how stunning it was and thought it would be amazing to race here. I feel prepared and ready for this challenge,” said Ferrari, who will stay at his coaches’ fathers house ahead of the event and looks forward to sharing stories about the area with him.
In the female division of the 72km race, Ines Marques of Portugal is heading to the race feeling strong, having won the Ultra Trail National Championship earlier in the season and having enjoyed a good training block. For Marques, the trail is also special to her.
She said, “I have already done part of the Portuguese-Spanish Camino de Santiago route by bike with a group of friends, and it was an unforgettable experience! My mother has also completed the same path on foot this year with her friends, so it is certainly special for my family. I feel it will be a unique challenge and a good opportunity to do another part of the path but this time via my favourite format – running!”
With the race also marking its 11th anniversary, and its first as a UTMB World Series event, there will be plenty to celebrate over the weekend. The top-three finishers in each category will automatically qualify for the UTMB Mont-Blanc 2022 or 2023 while all other finishers will collect Running Stones that amount to lottery tickets for the UTMB Mont-Blanc 2023 and the UTMB® World Series Finals.

The countdown is on to the Swan Valley Polocrosse Nationals