Qantas To Expand PER Gateway With Flights To JNB And JKTViking Marks Float Out Of Newest Ocean ShipNews From Your Travel ClubLaos Phenomenal Cloud of BatsNew green pearl in the Allgäu: Das RübezahlMastercard Expands Travel SuiteAll-Inclusive and Carefree – Sustainable Hotels with Full Board PackagesRevenge travel: The new normal of post-COVID worldAn Intelligence Analyst’s View on Traveling to Europe NowExperience Authentic Gettysburg for Yourself
Coral Princess Arrives at New Homeport of Brisbane as Momentum Grows for Cruising in Australia - Global Travel Media 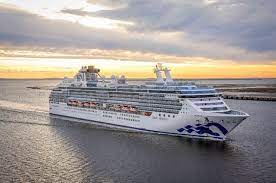 The return of cruising in Queensland continued today with the arrival of Princess Cruises’ Coral Princess into Brisbane this morning to commence her inaugural season.  The ship’s arrival marks the first ever ship to be homeported at the new state-of-the-art Brisbane International Cruise Terminal (BICT) and the first of Princess Cruises’ MedallionClass vessels to call Australia home.

“Queensland will feature front and centre in a new winter program of sailings from Australia, which demonstrates Princess Cruises’ commitment to cruising Down Under and to the local travel agent community. Our focus on Brisbane also reflects the demand for cruise holidays among Queenslanders, as well as the growing interest in domestic cruising.”

The 2000-guest ship will offer 11 cruises departing Brisbane ranging from 3-12 nights between June and August before returning for another 10 cruises this summer from November. The MedallionClass ship will make 48 calls to the State’s ports this year, including her first visits to Airlie Beach in the Whitsundays, Cairns and Port Douglas.

Director and General Manager of Clean Cruising, Dan Russell said his clients will be very excited to see another cruise ship return to Brisbane today.

“Our clients have been eagerly waiting for a cruise ship to be homeported in Brisbane, and to see Coral Princess here today is another great step forward for the cruise industry. We have a number of clients booked on this MedallionClass ship for this winter season including a couple who have booked over 50 back-to-back cruises including two Round World Cruises in 2023 and 2024. We thank these guests and all the cruise guests far and wide for their patience as we restart cruising in Australia.”