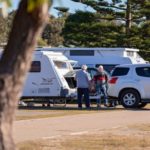 Caravan and holiday parks across northern parts of Australia are set to be inundated with tourists in the wake of the Federal Election, which delayed the first COVID-restriction-free nomad season in two years.
However, the trend of last-minute bookings that emerged in response to uncertainty over travel restrictions shows no signs of dissipating according to data collected by Australia’s largest regional accommodation provider, the G’day Group.
The company, which has around 300 properties across the country, recently surveyed nearly 11,000 members of its industry leading G’day Rewards loyalty program to understand winter travel intentions now that border restrictions have been removed.
60% of respondents indicated that they intend to travel over the next 3 months, with a further 23.5% indicating that they intend to travel within the next 3-6 months. However, despite having strong intentions to travel, many are still waiting until the last minute to book, with nearly 50% of those surveyed indicating they plan to book only 1-2 weeks before their trip.
G’day Group Chief Executive Officer Grant Wilckens said that despite a delayed start to ‘nomad season’, bookings were already well ahead of last year with a last-minute surge expected to make it one of the busiest seasons on record.
“Each election year, we see a delay in winter travel as grey nomads stay home to vote before hitting the road. However, after two years of travel uncertainty and lockdowns, we’re expecting it to be a massive nomad-season as more Aussies hit the road and head north in search of sun,” he said.
“We’re already seeing bookings in our northern G’day Parks up nearly 50% on last year and 85% when compared with the last non-COVID year. With half of travellers indicating their intention to book at the last minute, we’re expecting big demand across these parks over winter.
“However, I would encourage those who were thinking about booking at the last minute not to wait. Parks are going to start filling up quickly now the election is behind us and they’re also balancing a huge lift in demand for long-term accommodation because of massive pressure in the housing market.”
“Obviously it’s really pleasing to see nomads hitting the roads again and exploring our backyard, but I’d encourage anyone thinking of doing so to plan ahead so you don’t miss out.”
According to the survey Queensland and New South Wales are the most popular travel destinations over the winter months, with 45% of respondents indicating they intend to travel to one or both of these states, followed by South Australia (37%), Victoria (33%) and WA (27%).
Intended length of trips were mixed with 41% indicating they intend to travel for one month or between one and three months, 26% intending to travel for a week and 20% intending to travel for more than three months.

Caravanning and Camping most popular holiday type for Australians in 2019, with 60 million holiday nights