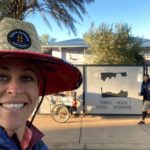 On Saturday the 4th of June 2022, Chimu’s Global Relationship Manager, James McAlloon, set off from Alice Sprints to complete what he started when the global pandemic hit in 2020; to walk coast to coast across Australia.James’s original quest to walk coast-to-coast was thwarted when Western Australia hard closed its border to non-residents amidst COVID-19 outbreaks. To round out his original quest, James made the decision to change course, walking the remaining 1,300km north to finish at the iconic Uluru. Although not reaching the west coast as originally intended, James still managed to walk 3,450 kms, taking the long way round and raising approximately $40,000. These funds went directly to supporting 900 families in South America who were struggling from the instant disappearance of tourism, with no government support.  His original quest was labelled Footsteps for Food.
Now that the borders are open again, McAlloon is determined to finish the journey and reach the idyllic shores of the Western Australian coast. Starting in Alice Springs, he will head northwest across the Tanami Desert to Broome where he will finally feel the waters of the Indian Ocean under his feet, thus closing off his original pledge of Australia, coast to coast by foot.

Not one to adventure without purpose, on this journey, James will raise funds and awareness for Purple House.

“On this journey I really wanted to give back to the communities that welcome me as I travel through their country. It makes sense to support an organisation that provides direct, on the ground care to these communities.” Said James McAlloon, Global Relationship Manager for Chimu Adventures.

This Trek will be a total of 1702 km, over 800 kms longer than his original pledge, which James is planning on finishing in 6 weeks and, this time, will take along his partner, Emma Williams. Since this journey is more remote than the previous one, James has had to update his wagon to be more robust, with travel essentials being notably more water and equipment, that will help him survive with no access to tanks or taps.

“The first half provided me with great experience, but ultimately this time I’ll be much more remote, with hundreds of KM’s between water stops. It’s quite exciting, really! Thus, we’ve needed to reengineer and custom build our cart from the ground up.” Said McAlloon

Given the remoteness of this trek, James will also be carrying a satellite phone and an emergency position indicating radio beacon (EPIRB), just in case, reassured that in a worst-case scenario, Australia has one of the best rescue logistics in the world.

“I’ve been dreaming about finishing this for two years, so the anticipation is huge. However, I’ve also had a lot of time to think about what’s next, with an epic Antarctic Expedition in the book -details to come.” 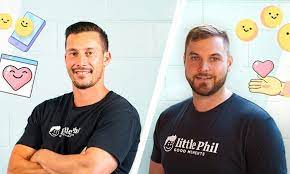 919 Wines Durif… D Is For “Dig Deep for Drought Relief”