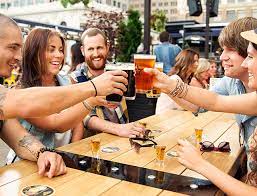 With plenty of craft brews to go around, Calgary’s vibrant microbrewery scene isn’t slowing down any time soon! Over the past few years, a surge of microbreweries has cropped up in Canada’s fourth-largest destination, and it’s easy to taste why – Alberta’s malting barley has a global reputation for being tops. Our province’s water, soil, and climate all work together to create ideal growing conditions for barley, which in turn makes for exceptional local beer.
Even while Calgary’s 40-plus microbreweries all use Alberta barley as their brewing base, each one offers beers as unique as their origin stories. Tool Shed Brewery had humble beginnings in a backyard tool shed on a basic five-gallon home-brew system. The newly opened Tailgunner Brewery also has an interesting backstory – the name was inspired by the co-founder’s grandfather, a tail gunner in WWII who was captured and imprisoned in Holland. The drink labels pay homage to him, his flight crew, and the women back home who kept the economy going in the 1940s.
It’s not just through pub taps that you can get a taste of the craft beer boom – the trend has crossed over into innovative Calgary kitchens, too. With the leftover spent grain from brewing, The Mash creates uniquely flavorful pizza dough for their pies. The Heier/Kozloski family, who also own and operate Half Hitch Brewing, believed there was more potential for Brewer’s Spent Grain, which is packed with protein and nutrients that promote healthy digestion.
The people working behind-the-scenes in Calgary’s breweries are doing much more than feeding Calgarians and visitors with tasty beers and eats. At The Establishment Brewery – which won Canadian Brewery of the Year award in 2021 – Natasha Peiskar has been spearheading meaningful industry change. In addition to her role as Production Manager & Brewer, she is also President and Co-Founder of Pink Boots Society Canada, which was created to assist, inspire, encourage and educate women and/or non-binary individuals in the industry. Over at Ol’ Beautiful Brewing Co., employee Adam Kieran has played a big role in advancing the company’s commitment to inclusivity and giving back to the community. Adam, who is known for his drag persona Valerie Hunt, has performed at the brewery for pride patio parties, dressing up the cis-gendered hetero staff in drag.
The best way to experience the city’s thriving craft brew scene this spring is with Tourism Calgary’s new Beers & Cheers Pass. Launching May 3, 2022 and running until the end of June, the Pass is a free “Craft Check-In Challenge” with prizes for users as they brewery hop around Calgary Alberta.

How to plan for summer in the Yukon

Promotion of adventure experiences key for US and Canada border reopening, says GlobalData