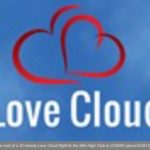 More than a century has passed since the inaugural members of the Mile High Club became the first to have sex aboard an aeroplane while it was in the air. As a result, it has become a common aim for travellers and a story device in numerous literary works.
However, joining the Mile High Club is not an easy task since most commercial airlines contempt anyone who attempts to join its ranks while flying. While commercial plane travel isn’t typically the most discrete venue for such assignments, that isn’t going to help much.
To some readers, that sounds like an opportunity for a business, and you’d be correct. Love Cloud, a Las Vegas-based firm recently featured in the New York Times, offers a variety of romantic options for couples to pick from. Love Cloud’s website focuses on the Mile High Club, but it also provides three-course meals and the opportunity to marry and renew one’s vows while flying.
According to the New York Times, the pilot wears noise-cancelling headphones the entire time the plane is in the air. Additionally, larger parties can also book flights through the service geared at couples.
The cost of a 45-minute Love Cloud flight to the Mile High Club is US$995 (about AU$1392). Andy Johnson, the company’s creator, says this is their most popular product. Johnson told the Times, “I’ll tell you right now, we help keep individuals from divorcing.”
According to the story, Johnson is also considering expanding Love Cloud’s services to Los Angeles. The Mile High Club’s membership is expected to grow in the coming years.

Southwest Airlines Extends Flight Schedule Through The End Of 2019