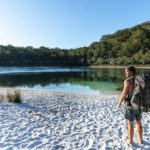 Last Monday night Australia tuned in to watch 24 castaways battle it out in the premiere episode of the 2022 season of Australian Survivor: Blood V Water. While the true star of the show was the visually spectacular terrain around Queensland’s Charters Towers, all admiration was on the guts and the grit needed to outlast, outwit, and outplay other contestants. Take inspiration from this year’s famed game to tackle – and survive – these heart-pumping escapades. From bush to beach and sea to sky, Queensland is packed with adventure. These seven epic experiences focus on self-sufficiency and test both physical and mental strength to survive with minimal creature comforts.
Get ‘Survivor ready’ with a bush navigation workshop
Refine your trekking talents on a three-day Navigation Training Workshop at Mount Barney Lodge. Under the expert guidance of mountaineer Innes Larkin, navigate the wild terrain of Mount Barney National Park learning hands-on orienteering skills. Back at ‘base camp’ test your knowledge with theoretical assessments. At the end of the course carry the confidence to conquer the most challenging landscapes like a true ‘sole survivor’. Hut and camping accommodation is included but participants must supply and prepare their own food.
Test your stamina along Australia’s longest rail trail 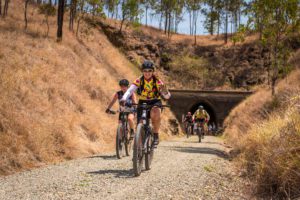 Get the adrenaline pumping on Australia’s longest rail path, the Brisbane Valley Rail Trail, a 161km taxing run between the city of Ipswich and the rural town of Yarraman, north-west of Brisbane. Head off-road on foot, horseback or bicycle and go all out on a multi-day mission, passing through charming country towns and rural landscapes.
The sheer length of this trail makes it a true test of endurance. But don’t be the first to throw in your ‘buff’ at the end of a strenuous day of walking or riding, plan ahead and pull in for a cool beverage and warm yarn at one of the iconic county pubs. Try Coominya, Esk, Toogoolawah, Moore, Linville, Benarkin and Blackbutt. For cyclists, Out There Cycling provides bike hire and a pre-booked shuttle service transporting riders and their gear to and from various points along the trail.
Tackle a self-guided multi-day paddle through the Noosa Everglades 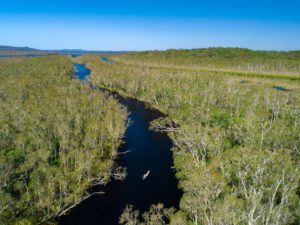 Paddle the Great Sandy National Park with Kanu Kapers’ two-, three- or four-day sustainable Noosa Everglades Self-Guided Kayak Tour. One of only two everglade systems in the world, the Noosa Everglades is a diverse wetland and river system, rich in flora and wildlife and home to over 40% of Australia’s bird species (rest assured there are no alligators in these waterways).
Learn from the experts with an orientation and kayaking tuition from the Kanu Kapers team, headed up by World Champion gold medal kayaker Vivienne Golding, before paddling into Queensland’s first UNESCO Biosphere. Highlights include Lake Cootharaba, Harry’s Hut campground and the 65km River of Mirrors. Paddlers must be self-sufficient and carry all food, water and essentials for the entire journey. Kanu Kapers provide kayaks, safety gear, an esky, dry bag and camping equipment. They can also book national park camping permits for an additional fee. Once you push off from the shoreline, you’re on your own.
Trust your tribe trekking through Tropical North Queensland
Follow in the footsteps (and ‘hoofsteps’) of Queensland pioneers on Getaway Trekking & Adventures’ Packers’ Ghost Trek multi-day hike. Departing Kalunga, 100km southwest of Cairns, this seven-day group walk pairs determined hikers with a team of skilled donkeys and follows tracks used by packers and drovers in the late 1800s. The experience is all about trusting your ‘tribe’. Trekkers must work in sync with their four-legged companions to traverse rough terrain in a test of stamina and teamwork. Along the way, visit historical mining sites like Silver Valley, where silver was first discovered in Australia, follow remote mountain ranges, cool off in clear rivers and camp out under the stars.
Conquer Queensland’s highest mountain
Standing at an imposing elevation of over 1,600 metres Mount Bartle Frere is Queensland’s highest peak. Drive an hour south of Cairns to Wooroonooran National Park and choose between two trails to ascend into the clouds. The steep 15km climb can take up to 12 hours to complete so plan to camp overnight and descend during daylight hours. The reward? Catch sunset and sunrise from the summit with panoramic views across the Atherton Tablelands and coastline. Tackle this epic climb during the cooler months between May and October and only if you are an experienced hiker with a high fitness level. This is not one for a first-time ‘survivor’.
Channel your inner castaway on a remote Queensland island
Uncover Indigenous culture and history when you explore the Ngaro Sea Trail connecting multiple islands in the Whitsundays. Hike, kayak and camp along the trail leaving nothing behind but your footprints. Transfer to, from and in between the islands with a Scamper or hire kayak gear through Salty Dog Sea Kayaking.
Rough it on the reef camping at Lady Musgrave Island. Only 40 ‘tribe members’ are allowed on this tiny Great Barrier Reef gem at any one time and facilities are basic and limited to one drop toilet. But the opportunity to welcome each morning with a swim in the pristine lagoon is worth it. Venture off the sandy highway and see K’gari from a different perspective on a self-guided (and self-sufficient) Adventure Hike with Fraser Island Hiking.
Join the pilgrimage to the world’s most remote music festival
Held in July at the base of Big Red, a 40m sand dune in the Simpson Desert 35km from Birdsville, the Big Red Bash commands preparation. The world’s most remote music festival sees 10,000 revellers journey to the edge of the desert for three days of rockin’ music under an outback sky. Set up your home under canvas at the festival campsite known as Bashville and hoist your tribal flag. In true Survivor-style, there are no showers, no running water and no electricity. Pack everything you need. Fortunately, onsite toilets and food trucks are available to refuel throughout each toe-tapping day.
From bush to beach and sea to sky, Queensland is packed with adventure experiences. Which one will you choose? As Jonathan LaPaglia would say, “it’s time to tally the votes”.  Make 2022 the year to push limits and achieve goals by conquering Queensland (so to speak).

The Crocodile Conundrum: Where Science, Conservation and Commerce Intersect