JR East leads the way to a new world of travel 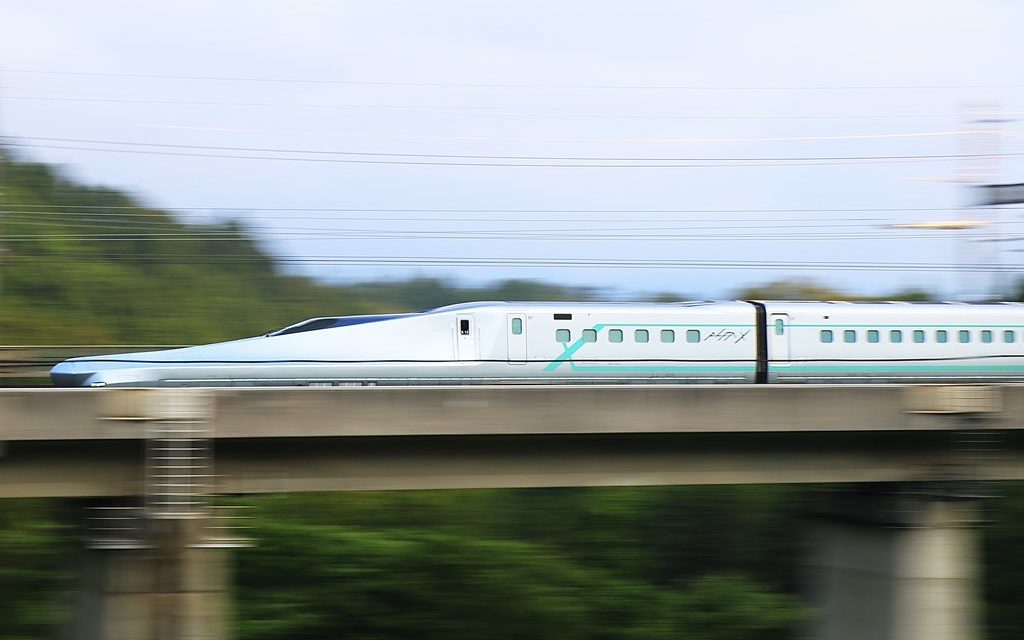 When it comes to advancements in travel technology JR East is in the frontline, allowing travellers to enjoy a taste of future travel. Aside from their convenient Shinkansen network operating in the Tohoku Region and their wide selection of other passenger first services, JR East continues to impress us with its efforts to bring the future of travel a little closer.
From launching Japan’s newest Shinkansen in the near future to metropolitan train stations run by robots, here are three ways JR East has taken the first step to invigorate their passenger’s journeys.
Creating Japan’s newest Shinkansen to date
Japan is renowned for its convenient and intricate train network, and it comes to Japanese trains we automatically think of the speedy Shinkansen. The operator of Shinkansen throughout Japan’s Tohoku region, JR East, has created four concepts regarding their efforts to improve their overall services. The concepts JR East created are “achieving greater safety and stability”, “improving ride quality”, “improving environmental performance” and lastly, “revolutionizing maintenance” of their trains.
One of JR Easts most anticipated ‘new technology’ is the ALFA-X (E956 series train) – an experimental Shinkansen although still in the prototype phase, it is to lead the development of next-generation of Shinkansen. It has a unique new design with two differently-shaped noses on each end, with one breaking record at 22 metres long – a length made to reduce the pressure and noise when entering tunnels at high speeds. The train also has features that help to suppress up-down vibrations as well as sideways motion, all to make the travellers onboard experience as comfortable as possible.
The second new addition to JR East’s trains is the E8 series. A new Rolling Stock Shinkansen made for use on the Yamagata Shinkansen line and will replace the current E3 Shinkansen. They are estimated to begin their passenger service operations from Japan’s springtime in 2024.
Providing a glimpse of the future of railway stations
JR East is making efforts to improve passenger services not only through their trains but even at their stations. Taking part in a major project to transform Tokyo’s Shinagawa area into a completely modern international transportation hub, JR East opened Takanawa Gateway Station in March 2020. They are hoping that their use of advanced robots and AI technology within the station will shine a light on how new technology can be part of the everyday passenger experience. With cutting-edge technology and station service equipment, Takanawa Gateway Station will eventually employ a special crew of advanced robots to provide travellers with transfer information, act as security guards, carry heavy luggage, serve food, and even clean the station facilities and equipment.
The AI robots were put to test in 2020, and in July 2021 JR East decided to utilise the robots in the station. They have also expressed that they aim to continue to innovate Shinagawa by extending the use of the robots to the area surrounding the station in the near future. Takanawa Gateway Station stands as an innovative test ground for AI technology, setting the hurdle high for the ‘new normal’ of future generation train stations.
Contactless customer services with robot baristas in Tokyo and Yokohama Stations
In part of yet another technological initiative, JR East has embarked on collaborations with start-up companies not limited to the Japanese but also other countries to futurise how people use railway stations by expanding their innovation initiatives. By incorporating services created from the diverse ideas of the start-ups, JR East plans to evolve their stations and further promote their ‘Beyond Stations’ concept to enhance customer experiences.
As part of this movement, a robot barista named ‘Ella’ developed by Singapore start-up company, Crown Technologies Holdings Pte. Ltd, was tested out in Tokyo and Yokohama stations, serving contactless barista-made coffee to those on the go. With Ella, customers are able to order their coffee through an app, meaning less waiting time and easy order pick up and payment through IC cards before you head off to your next destination. This service is the first instalment of many more to come, leading to solving common problems such as outgoing costs for restaurants and creating more contact-less services in high traffic stations. Ella officially launched its services in December 2021.

All Aboard the DMZ Peace Train