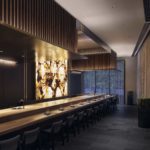 Their first collaboration outside of Asia celebrated consultancy and restaurant operator, Wa Creations draw on their extensive experience to design vibrant Omakase dining at W Melbourne’s signature Japanese restaurant, Warabi.
A Tokyo-based company that owns and operates award-winning, quality-driven Japanese restaurants throughout Asia, Wa Creations’ highly celebrated Japanese master chefs have collaborated with the team at Warabi in the pursuit of creating dining experiences driven by quality and authenticity.
Wa Creations have received numerous globally revered accolades both within Japan and abroad, including Michelin stars at multiple venues, and the Black Pearl Diamond awards. 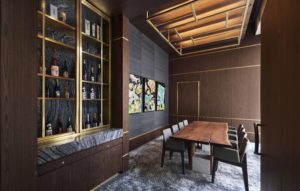 “We’re excited to bring Kappo dining to Melbourne in a way that fits with the style of the city within such an incredible venue, the W Melbourne.
Warabi seeks to celebrate supreme craftsmanship and precise preparation techniques through the Kappo philosophy, leaving guests with a memorable experience well after they visit”, said Founder of Wa Creations, Luke Clayton.
The 37-seat restaurant revels in Japanese culture, revealing an evolving multi-course menu that explores the Kappo philosophy of cuisine. Directly translating to ‘cut and cook’, Kappo celebrates craftmanship and precise preparation techniques.
Like the Japanese saying ‘Nihonshu wa ryori wo erabanai’ which loosely translates that sake does not clash with food, the sake list designed by Sommelier and Venue Manager Rosie Kim, sits in harmony with this ceremonial style of cuisine. A diverse range of Sake has been curated that highlights the different brewing styles across the various regions of Japan.
In addition to the sake, the extended drinks list is accompanied by bold cocktails, wine, and craft beers from Australia and abroad to spark the guest’s interest further.
The interior design of the venue has been led by Hachem, who has anchored the centre wrap-around counter with a backlit onyx marble artwork. In tune with the laneway inspiration throughout W Melbourne, Victorian bluestone tiles lead through to reveal a private dining room that seats up to eight and is overlooked by an original work by local Melbourne tattoo artist, Timothy Dywelska.
“Warabi is set to shake up Japanese dining in Melbourne, a vibrant addition to the local scene and one which has been led by W Hotel’s tireless pursuit of exploring what is New/Next”, said W Melbourne’s General Manager, Damon Page.
A highly anticipated addition to the offering at W Melbourne, post having opened doors in February of this year, Warabi is the fourth venue to open at W Melbourne, sitting alongside Lollo by Adam D’Sylva, signature bar Curious and café-come-bar Culprit.
Currently opened for just sixteen diners per night, with capacity increasing in the first quarter of the new year.
Edited by: Stephen Morton