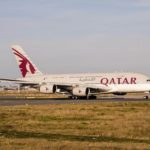 The first-ever FIFA Arab Cup™ will take place in Qatar from 30 November to 18 December, with Qatar Airways as the Official Airline Partner of the tournament.
With 16 participating nations, fans can now look forward to the tournament with a host of exclusive Qatar Airways Holidays packages on offer from the airline, which will be the first touchpoint for the majority of football fans, players and coaching staff for the duration of their stay in Doha. The qualifying countries have been drawn into four groups: Group A: Qatar, Iraq, Oman and Bahrain; Group B: Tunisia, UAE, Syri­­­­a and Mauritania; Group C: Morocco, Saudi Arabia, Jordan and Palestine and Group D: Algeria, Egypt, Lebanon and Sudan.
In support of the event, Qatar Airways Holidays has launched a range of travel packages for the inaugural FIFA Arab Cup Qatar 2021™ welcoming global football fans to enjoy the finest Qatari hospitality and cheer their favourite team in person.

Fans will be offered the flexibility to build their own package for the FIFA Arab Cup Qatar 2021™ which includes flights with Qatar Airways, the Official Airline Partner of FIFA. The ‘Build Your Own’ feature will offer the functionality to choose their preferred travel dates, hotel accommodation and match tickets. Customers can secure access to bookings by visiting qatarairwaysholidays.com/arabcup.
Qatar Airways Group Chief Executive, His Excellency Mr Akbar Al Baker, said: “With less than a year to go until the FIFA World Cup Qatar 2022™, this tournament will be the perfect test run for us as Official Airline and Official Partner of FIFA to prepare for the big stage. As this will be the first-ever FIFA Arab Cup™, Qatar will showcase the best of pan-Arab football. We want to provide a seamless primary touchpoint for fans, players, coaching staff and officials during their journey and stay here so that they can enjoy the best tournament possible.”
In addition to the exciting travel packages available, enthusiasts attending the FIFA Arab Cup Qatar 2021™ will be able to play virtual football and enjoy a host of other action-packed games when they visit the Qatar Airways pavilion located at the Al Bayt Stadium’s public arena, which is set to contest the opening and final matches of the tournament. The airline will be welcoming spectators to step into the spotlight and create memories inside its FIFA Arab Cup™ inspired photo-booth, by capturing a selfie to share with friends. Qatar Airways Official Frequent Flyer programme will also offer visitors the opportunity to earn 1,500 bonus Qmiles upon joining its Privilege Club at the event.
Most recently, the airline sponsored the 2021 Concacaf Gold Cup and the UEFA Euro 2020™ and has an extensive global sports partnership portfolio that includes football-governing bodies such as FIFA, CONCACAF and CONMEBOL. As FIFA’s Official Partner, Qatar Airways has sponsored mega-events including the 2019 and 2020 editions of the FIFA Club World Cup™ and will sponsor the FIFA World Cup Qatar 2022™. Qatar Airways also sponsors some of the world’s biggest football clubs including Al Sadd SC, Boca Juniors, FC Bayern München, K.A.S. Eupen, and Paris Saint-Germain.
The national carrier of the State of Qatar continues to rebuild its network, which currently stands at over 140 destinations. With more frequencies being added to key hubs, Qatar Airways offers unrivalled connectivity to passengers, making it easy for them to connect to a destination of their choice.
A multiple award-winning airline, Qatar Airways was announced as the ‘Airline of the Year by the international air transport rating organisation, Skytrax, in addition to securing five additional awards including World’s Best Business Class, World’s Best Business Class Airline Lounge, World’s Best Business Class Airline Seat, World’s Best Business Class Onboard Catering and Best Airline in the Middle East. The airline continues to stand alone at the top of the industry having won the main prize for an unprecedented sixth time (2011, 2012, 2015, 2017, 2019 and 2021). The airline’s hub, Hamad International Airport (HIA), was also recently recognised as the ‘Best Airport in the World 2021’, ranking at number one in the Skytrax World Airport Awards 2021.
In addition to this, Qatar Airways is the first global airline in the world to achieve the prestigious 5-Star COVID-19 Airline Safety Rating by Skytrax. This follows the success of Hamad International Airport (HIA) as the first airport in the Middle East and Asia to be awarded a Skytrax 5-Star COVID-19 Airport Safety Rating. These awards provide assurance to passengers around the world that the airline’s health and safety standards are subject to the highest possible standards of professional, independent scrutiny and assessment. For full details of all the measures that have been implemented onboard and at HIA, please visit qatarairways.com/safety.

How To Become a Horse Trainer In Australia

Virgin Australia And The AFL Kick Off New Five-Year Partnership